In four weeks, Washington state voters will be deciding on Referendum 74, a law that, if approved, would allow same-sex marriage. This op-ed of mine, urging support for the referendum, was published in a Seattle-area newspaper last week. It’s a more well-behaved version of my usual argument—enjoy. 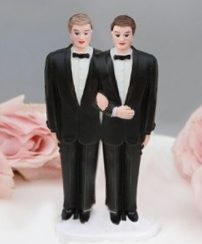 Now, at a time when Christians lament the decline of marriage, gay and lesbian couples want to embrace it. This represents a great opportunity for Christians to lead once again. They can do it by supporting Referendum 74 (R-74), which would approve the bill, signed by Gov. Chris Gregoire, to legalize marriage equality in Washington.

Of course, some Christians may claim there are numerous religious arguments against same-sex marriage. Let’s examine these to see why this argument falls flat.

Biblical marriage is not the institution that conservatives imagine it to be. The Old Testament says that you can only marry someone from your own tribe, and once you are married, it’s fine to have sex with concubines. It offers other marital advice as well: You can marry a woman by first raping her; you can make sex slaves of captured women; a man must sleep with his deceased brother’s wife to produce heirs; and polygamy is permitted.

Let’s not pretend that the definition of marriage has been static. In fact, marriage was most recently redefined in the United States less than 50 years ago when laws against mixed-race marriage were overturned. Perhaps society has matured so that we can expand it again to include all consenting adults.

For arguments against homosexuality, many Christians point to the biblical towns of Sodom and Gomorrah, which God destroyed with fire and brimstone because of the perceived sin of homosexuality. But the Bible makes clear that the true sin of Sodom was attempted rape. This has nothing to do with the loving, monogamous, homosexual relationships that stand at the center of today’s discussion of same-sex marriage.

The Book of Leviticus is another source of anti-gay ammunition used by opponents of same-sex marriage because it calls gay sex an abomination. This sounds pretty damning, but the word “abomination” is also used to describe eating forbidden food such as shellfish, sacrificing blemished animals, performing divination or wearing men’s clothing if you’re a woman. These are ritual abominations; homosexuality was not forbidden because of any innate harm. With what justification can one select the anti-homosexual verses and ignore the rest?

The underlying objection to homosexuality for many is that gay sex is icky or distasteful. Fair enough, but then the solution is easy: If you don’t like gay sex, don’t have any.

If you’re prudish about gay sex, consider that there may be ickier or more distasteful sex happening between straight partners than gay, simply because there are far more straight couples. The solution is simply to let consenting adults resolve these questions themselves.

Another popular Christian argument against same-sex marriage is that the purpose of marriage is procreation. But is that all they get out of marriage vows? “I promise to be your faithful partner in sickness and in health, in good times and in bad, in joy as well as in sorrow”? And what about couples who don’t want children, can’t have them or are beyond child-bearing age? Are these marriages invalid or inferior? Of course, if you were to ask opponents of marriage equality why a straight couple should get married instead of living together, the procreation argument would likely go out the window, replaced with profound thoughts about love and commitment — precisely the reason same-sex couples want to get married.

Open-hearted Christians have a chance to reclaim that revolutionary spirit that guided them a century ago. To today’s religious leaders, I say: With all the disease, poverty, famine, natural disaster and economic troubles in the world, should same-sex marriage be a major worry?

There’s far too little love in the world as it is. It’s reprehensible to stand in the way of what love is here.

Almighty God created the races white, black, yellow, malay and red,
and he placed them on separate continents.
And but for the interference with his arrangement
there would be no cause for such marriages.
The fact that he separated the races
shows that he did not intend for the races to mix.
— Initial judgment against Mildred and Richard Loving, 1959

October 12, 2012 I’ll Do What I Wanna! Pulpit Freedom Sunday
Recent Comments
1 Comment | Leave a Comment
Browse Our Archives
get the latest from
Cross Examined
Sign up for our newsletter
POPULAR AT PATHEOS Nonreligious
1