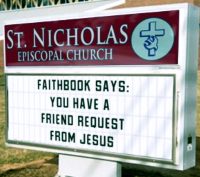 It’s surprising how much can go through your mind in three minutes. Here are some of the thoughts that came to me in my three minutes of daily prayer during Week 2 of the Atheist Prayer Experiment.

What if God’s persona is like an ordinary guy, like George Burns in Oh, God? … Please show yourself; please show yourself; please show yourself … Maybe the right metaphor is of an antenna trying to pull in a weak signal … If God exists, my brain is to be used, not set aside so I can accept nonsense … It’s hot in here … Maybe God will paint something interesting in phosphenes in my closed eyes … Why in Buddhism is there the Aha! of satori, but it doesn’t work that way in Christianity? … This is a chore … Why do people look up when they pray? God is like neutrinos; you face him just as much when looking down at the earth as up at the sky. … The gulf between me and a molecule might be about as vast as between God and me, so why should God care? … Hey—am I talking to myself here?? … Maybe God answering my prayer would feel like sticking a fork into an electric outlet.

One time I let the local church group prayer (I’ve been attending a small group once a week for a couple of months) be my prayer one day. Small group prayers are lo-o-o-ong.

One time I was in an agitated mood—I’d been arguing online about God and genocide—and it occurred to me that I’m praying to this guy. Do I actually want him to notice me? That sounds like poking a mean genie.

One time I prayed while driving and asked God to direct my attention to anything significant. Almost immediately, I saw a church-shaped house with a string of Tibetan Buddhist prayer flags. What was the message behind that?

A nice discovery was that praying (or at least being meditative) while driving made me feel substantially nicer. I took it as an opportunity to be calmer, stop early at yellow lights, draw wisdom from the bumper stickers of nearby cars, and telegraph well wishes to the people I saw around me. I felt gratitude for hearing a favorite song. I saw a panhandler and reminded myself to be nonjudgmental.

I need more of that after the experiment is over.

I’ve received a lot of comments on the experiment. One person suggested singing the prayer.

Another noted that, as a Christian with waning faith, she prayed for God to show himself. She desperately wanted to keep her faith, but God didn’t oblige. So now I’m trying the same thing, but if God didn’t much care about someone already in the fold (someone who really wanted this), why should he care about my unenthusiastic prayer?

Other bloggers have weighed in. In a rare and noteworthy moment of concord, atheist PZ Myers thinks the experiment is a stupid idea, and Catholic Mark Shea agrees.

I’ve gotten more support from Dwight Longenecker and Elizabeth Scalia, and Rebecca Hamilton says that she’s warmed to the idea. (Okay—Rebecca says that it wasn’t her but God who pushed her in that direction, but let’s not ruin this moment of harmony.)

Leah Libresco suggested the Litany of Tarski, a prayer template that can be adapted to say:

Nice. That’s a sentiment that I can get behind.

Let me relate one more outside conversation. Justin Brierley, the organizer of this crazy experiment, asked what it would take to convince any of the atheist subjects that our prayer had been answered—that the supernatural had made itself known to us.

That’s a good question, because a lot of what a Christian would point to, I might chalk up as coincidence or dismiss for some other reason. How do I keep myself honest and ensure that I don’t discard the signal with the noise?

On the other hand, how do I trust myself to perceive the supernatural correctly? The human mind is unreliable—confident memories aren’t necessarily accurate, we imagine patterns where they don’t exist, we’re subject to mental biases, we’re tricked by optical illusions, neurosis or psychosis can appear, and so on. Is that God talking to me or just me?

Science gets around this problem by using a community to duplicate and validate its findings. There are too many excuses I could make if the experience were all my own, so I’d want to crowdsource it in the same way. Have God speak to everyone. For example, maybe the entire world has the same spiritual dream where God gives them instructions or insights, or maybe we see “YHWH” spelled out in stars. That is the kind of evidence I’d like to see—something where I have some corroboration that it is valid.

This still isn’t perfect, and “any sufficiently advanced technology is indistinguishable from magic.” Sufficient-advanced aliens could dupe us into imagining the supernatural when we were just seeing technology. Still, this would be a lot more evidence than we’ve seen to date.

This points to what I think is Christianity’s biggest challenge. Thoughtful Christians often say that it’s the Problem of Evil (why would a good god allow so much bad in the world?). But no, I think it’s the one that hobbles this experiment: the Problem of Divine Hiddenness. If an omnipotent God exists and wants us to know him, what’s stopping him? Why is the existence of God not as obvious as that of the sun?

I find [praying] really difficult,
like being told to push very hard on a nonexistent wall.
I have some sympathy for mimes.
— a participant in the Atheist Prayer Experiment

October 3, 2012 “I Used to be an Atheist, Just Like You”
Recent Comments
0 | Leave a Comment
Browse Our Archives
get the latest from
Cross Examined
Sign up for our newsletter
POPULAR AT PATHEOS Nonreligious
1