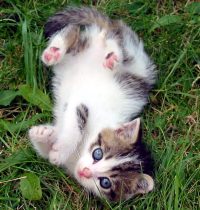 Leah Libresco at the Unequally Yoked blog has responded to my blog post about objective morality, as have many commenters. I’ll try to hit the ball back over the net and respond to some of these ideas.

A serving of vegetables that we need to get out of the way first is the definition of “objective.” I tried to nail down the definition that I wanted to use, but I still think many readers and I were not on the same page.

Here are three definitions that I see being used. Each is reasonable, but we need to agree on the one we’re using.

1. Objective means “strongly or viscerally held.” Christian apologists often use this. “By ‘objectively wrong,’ we refer to those things that we all know are just wrong,” they’ll say, and then give something hideous (torturing babies is popular) as an example.

2. Objective means “universally held” or “that which reasonable people can be argued into accepting.” Consider this statement: “Bob’s car is yellow.” No one cares much about this claim, but ignore that—suppose that you wanted extraordinary evidence. I could send you a photo of me in my car. I could email you the names of people who could vouch for this claim. I could show you my driver’s license (connecting my face to my name), my car registration (connecting my name to a particular car’s vehicle ID number), and then the yellow car in my garage (with that VIN). And so on.

I think that this is what the Declaration of Independence means when it says, “We hold these truths to be self-evident.” “These truths” are such that someone either already accepts them or can be convinced that they’re valid.

3. Objective means “grounded outside humanity” or, as Merriam-Webster defines it, “having reality independent of the mind.” 1 + 1 = 2 may be objectively true by this definition, for example. Leah’s example: “Russell’s teapot is orbiting the sun.” This claim is hard to prove, but that doesn’t change the fact that it’s either true or false.

Consider this parallel to humans’ common moral instinct: our common appreciation of cuteness. Small, helpless, big-eyed things like babies or kittens provoke caring feelings in most of us. “Kittens are cute” is probably objectively true by definition 2. We can analyze why we feel this way (evolution probably selected adults who are drawn to help human babies and similar-looking things) but that doesn’t matter. What’s interesting is that it’s a sense shared among most humans.

Why do we react instantly when we see someone in serious danger—stepping in to pull someone out of harm’s way, shouting  for help, and so on? We just do, and almost everyone would act in a similar way. We can analyze the action from an evolutionary or physiological standpoint, but again the point is that this is a shared human instinct.

About Leah’s debate with Hemant Mehta, who shares Leah’s sense of objective morality, she says,

I was trying to press him on where the yardstick or rulebook or whatnot comes from.

My answer is that morality is composed of an instinctive part (the Golden Rule, perhaps) along with a societal part. The first part explains the commonality among people, and the second explains the differences.

Obviously, the instinctive part doesn’t express itself identically in every person. For example, the popular TV series Dexter is about a sociopath (someone without this instinct) who was taught how to pass in ordinary society. Similarly, every person from Seattle doesn’t express an identical Seattle moral sense. These are tendencies, not immutable constraints.

There’s my answer, but how do proponents of objective morality answer this? I’d like to know more about the external grounding of this morality, and I wonder why it’s even introduced since it seems a far more fanciful explanation that no better explains the morality that we see in society.

[Bob is] claiming that we can’t even ask if [a widespread moral] consensus is correlated with anything, since there’s nothing for the consensus to be true about.

I’ll agree that there’s nothing absolute for the consensus to be truth about. When we say, “Capital punishment is wrong,” there is no absolute truth (the yardstick) for us to compare our claim against. Is capital punishment wrong? We can wrestle with this issue the only way we ever have, by studying the issue and arguing with each other in various ways, but we have no way to resolve the question once and for all by appealing to an absolute standard.

Let me bring up accessibility again. If there is objective truth about capital punishment but we simply can’t access it (as if God’s Big Book of Morals exists but we don’t have a library card for God’s library), the objective moralists have won a pyrrhic victory. Yes, objective moral truth exists, but if we can’t reliably access it, what good is it?

If Bob doesn’t think there’s some external standard that his personal understanding of morality can grow to more perfectly resemble, then I’m really baffled about how he approaches new questions. Is the goal just to more perfectly and consistently live out your essentially arbitrary moral preferences?

Again, I get stuck on this idea of an external standard. I’ve seen no evidence of such a thing.

As for “arbitrary,” my morals may be arbitrary in an absolute sense, but of course they don’t feel arbitrary in a throwing-darts-at-a-list-of-possibilities sort of way. I consult my conscience with moral questions, and it gives me answers. No need for an external anything. (If you say, “Wait—where did that conscience come from? Didn’t that get put in there by an external agent?” then I point to evolution as the source.)

If we were bears or Klingons, we’d evaluate situations differently. We can be horrified at the actions of other species, but by what external standards do we judge those actions objectively wrong?

As it stands, I don’t understand why Bob feels a particular loyalty to his arbitrary moral preferences. Any debating atheist knows that we’re running on buggy hardware [that is, we have lots of biases]…

As for loyalty, that suggests that I have a choice, but all I have is a conscience that tells me what’s right and what’s wrong. I have no higher authority to appeal to to check its imperfect moral claims. If Leah’s point is that we shouldn’t be too smug about what our fallible brains tell us, I agree. But these imperfect brains are all we’ve got.

There’s no reason for Bob to treat his moral preferences as any more sacred or central to his identity than his gastronomic preferences.

My moral preferences certainly aren’t any more sacred in an absolute sense (as if God tallied my morals but didn’t care about what I ate). But from my perspective, I think that my morals are more important. If you violate my moral sense, I might tell you that you’re mistaken or I might even take action to stop you, but not much happens if you violate my culinary sense.

Either [moral or gastronomic preferences] could be maladapted to his current environment, and it’s worth poking around to see if he can come up with something better. Does he really think we’re powerless in the face of these questions?

There’s evidence that evolution built us to think that rape and slavery are okay, as long as you’re on the giving end. We see this attitude in the Old Testament, for example. However, modern society teaches us something different. This is the instinctive moral sense being overridden by the societal moral sense. Sam Harris writes about this in his The Moral Landscape. As I understand this, he argues for an objective morality of the second kind—one that we can hone with science and reason.

Here I agree with Leah that we aren’t stuck with our evolutionary programming. We can and do rise above our instincts.

I’m left rejecting objective morality (again: I’m using the William Lane Craig definition, above) for two reasons. First, this resolves no puzzles. The natural explanation is sufficient. And second, I see no evidence for it. The dictionary doesn’t appeal to an objective element to morality, and I see no need to either.