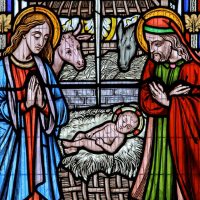 In December, thoughts turn toward Christmas. In particular, to the Isaiah quote in Matthew’s narrative of the birth of Jesus: “The virgin will conceive and give birth to a son, and they will call him Immanuel” (Matt. 1:23).

Matthew documents the fulfillment of a prophecy written 800 years earlier. Powerful evidence of the truth of the Bible?

Well … no. The first reason is the reason by which anyone would reject a claimed prophecy: the evidence of the fulfillment is not independent but comes only through authors (of Matthew and Luke) who one must assume had read the prophecy. They had motive and opportunity to claim a fulfillment where none existed. (I write more about common-sense requirements for a fulfilled prophecy here.)

But was that quote from Isaiah even a prophecy of a messiah? You’d expect something like, “The LORD God understands the burdens of His people and will send a savior. And ye shall know him by this sign: the virgin will give birth to a son” and so on.

Here’s what Isaiah 7 is actually about. In the early 700s BCE, Syria and Israel allied with other small states for protection against Assyria, the region’s 800-pound gorilla. Judah refused to join the alliance. Syria and Israel, fearing a potential enemy at its rear, moved to conquer Judah.

God spoke through the prophet Isaiah to tell the king of Judah that, with faith, his enemies would be destroyed. Isaiah tells the king to ask God for a sign of this prophecy, but the king refuses to put God to the test. Isaiah sees this as a lack of faith, scolds the king, and gives him a sign: “The virgin will conceive and give birth to a son, and will call him Immanuel” (7:14). Before the boy is old enough to understand right from wrong, Syria and Israel will be destroyed.

In other words, in five years or so, your enemies will be destroyed—that’s the point of the Immanuel story. The boy simply acts as a clock. And not only is Immanuel not a messiah, his three-verse story isn’t even a significant part of this chapter, which goes on to describe the impending conquest of Judah by Assyria and Judah’s painful future.

Yes, the Immanuel story is a prophecy, but it’s a prophecy that is to be fulfilled in five years, not 750. (And was the prophecy even fulfilled? Apparently not, according to the 2 Chron. 28:5–6 summary. 2 Kings 16:5 gives another history of the battle, with Judah the winner this time, but to argue that Isaiah’s prophecy was fulfilled you must argue that the Bible is contradictory.)

The Immanuel story doesn’t even claim to be a miracle. Women are virgins before having sex, pretty much by definition. The story says that a woman who’s never had sex will then do so, become pregnant, and deliver a boy. Happens all the time. If this was a miracle prediction, you’d expect more would be made of it to eliminate the (obvious) mundane explanation.

And if Immanuel’s story is supposed to foreshadow Jesus, where does the Immanuel prediction (“before the boy knows enough to reject the wrong and choose the right, the land of the two kings you dread will be laid to waste,” Isa. 7:16) map in Jesus’s life?

To make things even more difficult for Matthew’s claim, the word “virgin” in Isaiah 7:14 doesn’t really say that. First-century scholars could have had access to two versions of Isaiah, the Hebrew original and the Greek translation, the Septuagint. Since the author of Matthew was literate in Greek, he was likely more familiar with the Greek version. But these two versions use different words here—“young woman” in the Hebrew original and “virgin” in the Greek translation. The NET Bible is one that uses the older (Hebrew) term and has a thorough footnote documenting the scholarship behind this decision.

Why do most Bibles use “virgin,” even though the best sources use “young woman”? Perhaps only to avoid embarrassing Matthew.

And no one could fail to notice that, in Matthew, the baby is named Jesus, not Immanuel. Matthew prefaces his Isaiah quote by saying, “All this took place to fulfill what the Lord had said through the prophet” (1:22), but the prophecy isn’t fulfilled since Jesus is never called Immanuel—not just in Matthew but anywhere in the New Testament. In fact, the claimed fulfillment is contradicted just two verses later: “And [Joseph] gave him the name Jesus.”

Pope Benedict’s timely new book, The Infancy Narratives, emphasizes that the virgin birth is one of the “cornerstones of faith” and reassures us that it is not a myth. Though he rejects the idea that mythology entered the gospels, everybody who was anybody during that time in the eastern Mediterranean was virgin born—Alexander the Great in Greece, the Caesars in Rome, the Ptolemies in Egypt.

Despite the proliferation of virgin birth claims at the time, all were false except for the one for Jesus? That needs a lot of evidence, especially when Matthew’s argument is simply the misreading of a prophecy that expired centuries earlier.

This is the third biblical prophecy claim that I’ve studied (I’ve also written about Isaiah 53 and Psalm 22). Each has unique features, but I’m struck by one similarity: in context, each is plainly not talking about a future messiah. No serious scholarship is necessary to see this, just a willingness to let each chapter speak for itself. Only a determination to maintain the idea of supernatural prophecies, regardless of the evidence, props them up.

I pray that one day we may live in an America
where Christians can worship freely, in broad daylight,
openly wearing the symbols of their religion …
perhaps around their necks?
And maybe (dare I dream it?)
maybe one day there can be
an openly Christian president.
Or, perhaps, 43 of them. Consecutively.
— Jon Stewart

December 7, 2012
Looking for Christmas Gifts? Give Something Thought Provoking This Year.
Next Post