A Defense of Abortion Rights: The Spectrum Argument

Today is the 40th anniversary of the landmark Supreme Court case, Roe v. Wade. In honor of this important support for fundamental rights, here is a reposting of my primary pro-choice argument. 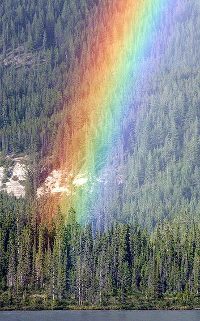 The pro-life position is often stated this way: (1) human life begins at conception; (2) it is murder to take a human life; therefore (3) abortion is murder and should be considered immoral.

We’ll return to that idea shortly, but first let’s look more closely at human life. I argue that there is a spectrum of personhood during gestation.

Consider a continuous spectrum from blue to green. Where’s the dividing line? Where does blue end and green begin? We can argue about this, but we agree that blue is not green. The two ends are very different.

What age is the dividing line between child and adult? Twelve years? Eighteen? Twenty-one? It’s a spectrum, and there is no objectively correct line. Again, the line is debatable but no one doubts that a child and an adult are quite different.

An acorn is not a tree, a silkworm is not a dress, a water molecule is not a whirlpool, a piece of hay is not a haystack, and 20 chicken eggs are not a henhouse of chickens. Similarly, a single fertilized human egg cell is very different from a one-trillion-cell newborn baby.

But the vast difference in the number of cells only begins to define the vast difference between the two ends of the spectrum. At one end, we have arms and legs, fingers and fingernails, liver and pancreas, brain and nervous system, heart and circulatory system, stomach and digestive system—in fact, every body part that a healthy person has. And at the other, we have none of this. We have … a single cell. In between is a smooth progression over time, with individual components developing and maturing. That’s the spectrum we’re talking about.

Let’s approach this another way. Consider a brain with 100 billion neurons versus a single neuron. The single neuron doesn’t think 10–11 times as fast. It doesn’t think at all. The differentiation of the cells into different cell types and their interconnections in the newborn may count for even more than the enormous difference in the number of cells.

Some pro-life advocates argue that the humans at either end of this spectrum are identical in every meaningful way and use the term “baby” for every point along the spectrum. I’ve raised babies (with help, of course), and that makes me something of an expert in identifying babies. As an expert, let me assure you that a single invisible cell isn’t a baby.

If eager expectant parents want to use the term “baby,” not a problem. It’s when pro-lifers want to impose that term on others to constrain their rights that we have a problem.

No, a rat is not a boy, blue is not green, and a single cell is not a newborn baby.

A lot revolves around what we call this spectrum. Do we call it Homo sapiens? With this term, there is no spectrum, because the species is the same—the single cell is Homo sapiens, as is the newborn baby.

What about “human”? That seems a good name for the spectrum—that is, we would call the newborn human but not the cell. Or, we might call the cell human but not a human. Keep in mind that live tissue samples are cells with human DNA and they’re not “humans.” Would they suddenly become humans if, through technological magic, they were made totipotent so that they could grow into a fetus? Pro-lifers would likely insist on using “human” for both ends of the spectrum.

All right, can we all agree on “person”? No, I’ve heard pro-lifers reject this as well.

This game where pro-lifers deny names to the spectrum quickly gets tiring. I really don’t care what the spectrum is called—humanity, personhood, human development, like-me-ness, whatever—call it what you want as long as the naming acknowledges the stark difference between the newborn (with arms and legs and a circulatory system and a nervous system and eyes and ears and so on) and the single fertilized human egg cell.

Speaking of games, the pro-life argument does seem a bit like a game, despite the serious consequences. The Slactivist blog and Valerie Tarico’s blog have shown that today’s foaming-at-the-mouth pro-life stance by evangelicals was not held by their predecessors 30 years ago.

Now, back to the original pro-life argument: (1) human life begins at conception; (2) it is murder to take a human life; therefore (3) abortion is murder and should be considered immoral. This argument fails because it is oblivious to the spectrum.

Pro-lifers claim to be celebrating life, but equating a newborn baby with a single cell and demanding that everyone else be bound by their beliefs doesn’t celebrate life, it denigrates it.

To be forced to give birth to a child against her will
is a peculiarly personal violation of [a woman’s] freedom.
— Disciples of Christ, 1978

Human life develops on a continuum from conception to birth.
— United Church of Christ, 1978

The fetus is not reckoned as a soul.
— Bruce Waltke, Dallas Theological Seminary, 1968

January 24, 2013 Pushback on Abortion
Recent Comments
144 Comments | Leave a Comment
Browse Our Archives
get the latest updates from
Cross Examined
and the Patheos
Nonreligious
Channel
POPULAR AT PATHEOS Nonreligious
1