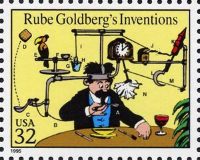 The Argument from Design (the Teleological Argument) says that life looks designed. We marvel at the cell’s tiny protein-building machines. Some bacteria have flagella that propel them at twice the proportionate speed (body lengths per second) of a running cheetah. A single microscopic cell is able to divide and differentiate into a full-grown oak or bear or human.

William Paley famously said over two centuries ago, “The marks of design are too strong to be gotten over. Design must have had a designer. That designer must have been a person. That person is God.”

We must avoid the temptation, however, to imagine that complexity implies design. Elegance might, but mere complexity (especially unnecessary or sloppy complexity) doesn’t give much support for design. The cell, marvelously complicated though it is, may be more a Rube Goldberg machine than the elegant product of an omniscient designer.

What Does the Argument from Design Mean?

Consider the design criteria human designers use. A bridge might be designed for unusually high loads, so strength would be most important in this design. Or maybe speed of assembly is an important criterion. Maybe the bridge is remote, so it should have a long life or be maintenance free. Maybe transportation is difficult, so it must use local materials. Maybe it’s in the middle of a town or city, so beauty is important.

These goals—strength, speed of assembly, durability, limits on materials, beauty—are just some of the criteria designers might follow. But a criterion you never find in a human design is that the finished product should have added junk.

You may not like the Art Deco decorations at the top of the Chrysler building, but they were put there deliberately to follow the criterion of beauty. You may find a design that was poorly built or left unfinished, but that was never a goal of the designer. Useless junk is never in a design on purpose.

Contrast this with the crap DNA has in it (as discussed in a recent post). Human DNA has a broken vitamin C gene in every cell as well as 20,000 other nonworking pseudogenes. Eight percent of our genome is composed of nonworking junk injected by viruses over millions of years. Atavisms (archaic genes that are accidentally switched on, like human tails) and vestigial structures (such as eyes in cave fish) are flashbacks to body features from species in the distant past. Onions have much more DNA than humans do, as do lots of other plants and animals.

Creationist responses such as Jonathan Wells’ The Myth of Junk DNA argue that we keep finding new uses for fragments of human DNA that we previously thought were nonfunctional. Okay, so the fraction that we think is useless will decrease. Will it go to zero? Will we find that onions really do need five times more DNA than humans? There is no reason to imagine this, and junk DNA lives on.

The Design Argument says that life looks as if an omnipotent human designed it. It’s clearly wrong. DNA, the marvelous molecule that apologists point to as evidence of a designer, looks unlike anything that any sane designer would make. DNA alone is enough to sink the Design Argument.

Note that you can’t just say that life is impressive or amazing or marvelous or complex. True or not, that would be irrelevant. These attributes could apply to lots of things—crystals are complex and snowflakes are amazing and rainbows are marvelous, but they weren’t created by a designer. You must show how life follows design rules that a designer (and the only examples of designers that we have are human ones) would have followed.

Another Christian response: I guess that just shows that God has a broad palette. Tidy DNA or sloppy DNA, clearly these organisms work. I’m not complaining.

Yes, they work, but don’t make the Designer Argument to explain then.

Not really. Some software comes from programmers, and some comes from random processes. Genetic programming evolves software like evolution evolves life forms. Competing versions of a program are randomly mutated and then selected for fitness, all within a computer. The winning programs in such an evolutionary process are the sloppiest software imaginable—not at all what a human would design, but reminiscent of DNA.

God’s design was perfect initially, but the Fall—that whole snake-and-apple thing—caused the imperfections in life that we see today.

Why would a human failing cause sloppiness in non­-human DNA? Anyway, this is irrelevant. It simply accepts that life doesn’t look designed, and the Design Argument fails.

Ah, but God is inscrutable. We don’t understand his ways. He designs in his own way that might seem bizarre to us.

If God’s handiwork is so bizarre that it doesn’t look like the work of any designer, then don’t make the Design Argument!

Does God exist? Maybe, but the Design Argument, which says that we see in life the attributes of design, is no tool by which to make the case.

There’s one thing the Bible makes clear:
The biblical God is a sloppy manufacturer.
He’s not good at design, he’s not good at execution.
He’d be out of business if there was any competition.
— Contact by Carl Sagan

January 18, 2013
The Perplexing Monty Hall Problem and How It Undercuts Christianity
Next Post

January 22, 2013 A Defense of Abortion Rights: The Spectrum Argument
Recent Comments
58 Comments | Leave a Comment
Browse Our Archives
get the latest from
Cross Examined
Sign up for our newsletter
POPULAR AT PATHEOS Nonreligious
1