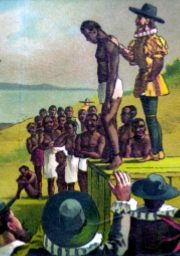 Our little friend William Lane Craig is up to his old shenanigans. God apparently can’t defend himself against charges that he condones slavery, so Craig steps into the breach to do it for him.

We need to help [skeptics] come to grips with the fact that they have not studied the Hebrew text carefully and in many cases simply have a misunderstanding of the text. So-called “slavery” in the Old Testament is a prime example.

Why, I do believe I’m being condescended to! But Craig isn’t alone in his view. This idea that biblical slavery was very different from American slavery—indeed, that it was a good thing—is common within many Christian blogs.

The slavery referred to in the Bible was a fundamentally different practice [than that practiced in the West]. Some translations try to indicate this by using the word “bondservant.” … Biblical “slavery” was not race-based (Stand to Reason blog).

The “New Testament Slavery” of the Ancient Near East … has little in common with the “New World Slavery” … of our American ancestors (Please Convince Me blog).

Let’s compare these two approaches to slavery. They’re a lot more similar than the apologists will admit.

During U.S. history, we had two kinds of servitude. There was indentured servitude, where Europeans would come to America to work for fellow Europeans in return for payment of their transportation. This servitude would typically last for five years or so.

And, of course, we had slavery. Slaves were almost always not Europeans. They were slaves for life, as were their children.

The Old Testament outlines the very same categories of servitude. Fellows Jews could be slaves, but only for a limited time:

That’s pretty much indentured servitude, and that’s the “slavery” that many Christians like to point to. They often ignore the other kind:

[God said:] Your male and female slaves are to come from the nations around you; from them you may buy slaves. … You can bequeath them to your children as inherited property and can make them slaves for life … (Lev. 25:44–6).

Slavery in the Old Testament was regulated, just like commerce. And, like commerce, slavery was kosher from God’s standpoint.

Granted, slavery was common in this part of the world. During New Testament times, as many as a third of the population of Italy were slaves. We can see the Bible as just a product of its times, but wouldn’t a book inspired by the omniscient and holy creator of the universe be better than that? And why were the Greek Stoics the first to condemn slavery and not God’s chosen people?

Now, back to Craig. Determined to force-fit slavery into a godly world, he says:

I think that [the point of the book Is God a Moral Monster? is] that our understanding of [slavery] is shaped by the experience of the American South prior to the Civil War and that what is described in the Old Testament is actually a sort of anti-poverty program designed to help the poor in the absence of a strong national government.

That’s an interesting spin. But is this so called “anti-poverty program” a moral institution? It must be, since God defines the rules for slavery and so obviously approves of it. But Craig has dug himself into a hole—either indentured servitude is moral for society today, or morality changes over time and we discard the idea of objective morality. Neither can be a pleasing option for Craig.

The problem is worse with slavery for life. Surely we can agree that this biblical institution is wrong today. Either it was wrong in Old Testament times, and God made a mistake in giving rules for it, or it was right then and morality changes with time. Here again Craig finds himself in a difficult spot.

How do Christians rationalize the fact that the Ten Commandments have “Don’t covet” but not “Don’t enslave anyone”? When we read the Bible, we see the work of Man, not the hand of God. The Bible was simply a reflection of their society.

Christians who justify slavery in the Bible are determined to shoehorn an ancient religion into modern society, but the result is as out of place as a Neanderthal in a tuxedo. My advice: they should stop embarrassing themselves.