The Perplexing Monty Hall Problem and How It Undercuts Christianity

The Perplexing Monty Hall Problem and How It Undercuts Christianity January 18, 2013 Bob Seidensticker 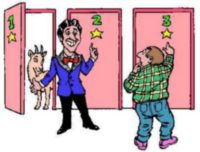 I first came across the fascinating Monty Hall Problem 20 years ago:

Suppose you’re on a game show, and you’re given the choice of three doors: Behind one door is a car; behind the others, goats. You pick a door, say No. 1, and the host, who knows what’s behind the doors, opens another door, say No. 3, which has a goat. He then says to you, “Do you want to pick door No. 2?”

Is it to your advantage to switch your choice?

Most people think that it doesn’t matter and that there’s no benefit to switching. They’re wrong, but more on that in a moment.

Humans have a hard time with probability problems like this one. You’d think that we’d be fairly comfortable with basic probability, but apparently not.

Here’s another popular probability problem: how many people must you have in a group before it becomes more likely than not that any two of them have the same birthday?

The surprising answer is 23. In other words, imagine two football teams on the field (11 per team) and then throw in a referee, and it’s more than likely that you’ll find a shared birthday. If your mind balks at this, test it at your next large gathering.

Now, back to the Monty Hall Problem. A good way to understand problems like this is to push them to an extreme. Imagine, for example, that there are not three doors but 300. There’s still just one good prize, with the rest being goats (the bad prize).

One lesson from this is that our innate understanding of probability is poor, and a corollary is that there’s a big difference between confidence and accuracy. That is, just because one’s confidence in a belief is high doesn’t mean that the belief is accurate. This little puzzle does a great job of illustrating this.

Perhaps you’ve already anticipated the connection with choosing a religion. Imagine you’ve picked your religion—religion #274, let’s say. For most people, their adoption of a religion is like picking a door in this game show. In the game show, you don’t weigh evidence before selecting your door; you pick it randomly. And most people adopt the dominant religion of their upbringing. As with the game show, the religion in which you grew up is also assigned to you at random.

Now imagine an analogous game, the Game of Religion, with Truth as host. Out of 300 doors (behind each of which is a religion), the believer picks door #274. Truth flings open door after door and we see nothing but goats. Hinduism, Sikhism, Jainism, Mormonism—all goats. As you suspected, they’re just amalgams of legend, myth, tradition, and wishful thinking.

Few of us seriously consider or even understand the religions Winti, Candomblé, Mandaeism, or the ancient religions of Central America, for example. Luckily for the believer, Truth gets around to those doors too and opens them to reveal goats.

Here’s where the analogy between the two games fails. First, Truth opens all the other doors. Only the believer’s pick, door #274, is still closed. Second, there was never a guarantee that any door contained a true religion! Since the believer likely came to his beliefs randomly, why imagine that his choice is any more likely than the others to hold anything of value?

Every believer plays the Game of Religion, and every believer believes that his religion is the one true religion, with goats behind all the hundreds of other doors. But maybe there’s a goat behind every door. And given that the lesson from the 300-door Monty Hall game is that the door you randomly picked at first is almost certainly wrong, why imagine that yours is the only religion that’s not mythology?

For reason is not just a debater’s tool
for idly refracting arguments into premises,
but a lens for bringing into focus the features of human flourishing.
— “What Is Marriage?” by Girgis, George, and Anderson

This is a modified version of a post originally published 11/28/11. 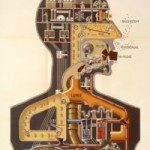 January 21, 2013 Argument from Design Busted!
Recent Comments
27 Comments | Leave a Comment
Browse Our Archives
get the latest from
Cross Examined
Sign up for our newsletter
POPULAR AT PATHEOS Nonreligious
1

Jon McNaughton: The Thomas Kinkade of...
Freethought Now!
Books by This Author Books by Bob Seidensticker