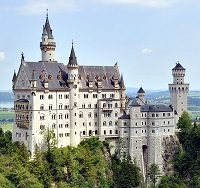 The book of Exodus gives God’s demand that the Jews avoid foreign religions when they returned to Canaan. The first commandment was, “You shall have no other gods before me” (Ex. 20:3). God had to make sure that they weren’t corrupted.

Wait a minute—how could they have been corrupted?

The Jews enter a land full of foreign gods—invented gods—but God had made plain the correct religion. How would those made-up gods look next to the real deal? Judaism would be a stunning and brilliant jewel compared to the other religions’ tawdry plastic beads.

Imagine the Hollywood set of a Western town, built with plywood facades, compared to a real building—a castle full of antiques and tapestries, say. Who’d be tempted to stray to the cutout imposter if you could have the real thing?

Another example: imagine that God provided Disney World for the Jews but warned against moving into the filthy trailer park across the street. Why bother with the warning? How could anyone possibly be tempted?

Similarly, with the Jews given the correct religion, how could God have ever been worried that another religion would be the least bit compelling?

… or maybe Judaism didn’t look special. Perhaps the prohibitions—remember that these were imposed by priests whose livelihood depended on Yahweh worship—made a lot of sense because in fact Yahweh of early Judaism looked similar to Chemosh, Molech, Baal, and other gods of the Canaanite religions.

The Bible’s own prohibitions argue that Judaism was made up, just like the rest.

If God exists, I hope he has a good excuse.
— Woody Allen

(This is a modified version of a post that originally appeared 9/30/11.)

February 7, 2013
Christians: What Would It Take to Change Your Mind?
Next Post

February 11, 2013 Atheists: What Would It Take to Change Your Mind?
Recent Comments
94 Comments | Leave a Comment
"Isn't it just like a cult member to dismiss the evidence against his cherished cult? ..."
Sunislocal Saving Haeckel: why “ontogeny recapitulates phylogeny” ..."
"The Bible is the most bought and least read."
Greg G. Is God the good guy or ..."
"(2016) “[There is] collective cluelessness…those who say this is well worked out, they know nothing, ..."
Sunislocal Saving Haeckel: why “ontogeny recapitulates phylogeny” ..."
"I wouldn't be surprised."
Michael Neville The Bible defeats its own Resurrection ..."
Browse Our Archives
get the latest updates from
Cross Examined
and the Patheos
Nonreligious
Channel
POPULAR AT PATHEOS Nonreligious
1

Nonreligious
You know the photo that came with your...
Cross Examined
TRENDING AT PATHEOS Nonreligious