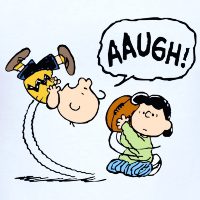 Charlie Brown keeps trusting in Lucy, and she keeps pulling away the football at the last minute. And still Charlie Brown comes back for more. Doesn’t he ever learn? What would it take for him to see that his trust is misplaced?

This is how God belief works. Christians assure themselves that God exists, and maybe they have a special experience or feeling that reassures them that they’ve backed the right horse. But then there’s that tempting call to connect with the external world and provide evidence that the belief is firmly grounded. Like Lucy with the football, they’re often disappointed when the evidence doesn’t stand up.

There’s a snappy answer or rationalization for every situation. If God’s existence is always a given, then we’re going to bend the reality to fit that assumption. But no one approaches truth that way in any other sector of life. We don’t start with an assumption and then try to twist the facts to support it. It’s the other way around: we start with the facts and ask what the most reasonable explanation is.

I’ve talked to lots of Christians who say that they do demand evidence, and that they would go where the evidence points. I have my doubts—I think that for many of them belief comes first and evidence is marshaled after the fact to support this presupposition— but let’s leave that for now.

I’ve also talked to Christians who admit that nothing would change their minds. That is, they can’t (or refuse to) imagine anything that could remove faith from their lives. Christianity is then the ultimate unfalsifiable hypothesis—“ultimate” because God is the most fantastic thing imaginable and “unfalsifiable” because for many believers, nothing will change their minds.

Mark Smith told of a discussion he had with Christian apologist William Lane Craig. He proposed this thought experiment: Craig goes back in time to see the dead body of Jesus put into his tomb. The stone is rolled up to cover the entrance. Now let’s imagine that on Sunday morning, nothing happens. No resurrection. Days go by, and nothing.

What does Craig think now? Does the skeptics’ explanation that the gospels were just the end point of 40 years of oral history within a gullible and pre-scientific culture begin to sound pretty good?

Some people are beyond evidence. Christianity for them is like the T-1000 in Terminator 2, the liquid metal robot that takes a beating and then reshapes itself after an injury to continue its rampage.

Consider a much more wholesome attitude toward evidence. Artificial intelligence pioneer Marvin Minsky said, “As scientists, we like to make our theories as delicate and fragile as possible. We like to arrange things so that if the slightest thing goes wrong, everything will collapse at once!”

Scientists want their theories to collapse if they’re wrong. If they’re wrong, they want to know it. Imagine a world where all Christians were this eager to understand reality, where they followed the evidence where it led rather than making their worldview unfalsifiable.

February 1, 2013
The Religious Foundation of Groundhog Day
Next Post

February 7, 2013 Christians: What Would It Take to Change Your Mind?
Recent Comments
6 Comments | Leave a Comment
Browse Our Archives
get the latest from
Nonreligious
Sign up for our newsletter
POPULAR AT PATHEOS Nonreligious
1