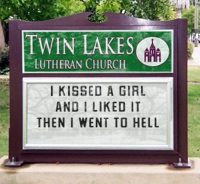 Over a year ago, I wrote a response to the poorly formed anti-homosexuality argument in an article subtitled “Christian defense against Homosexuality.” This was written by Matt Slick of the Christian Apologetics and Research Ministry (CARM).

The article is still there, unchanged, ridiculous arguments and all. It’s harmful enough to deserve another thrashing. Here are the claims that most need a response.

Is this the fabled Gay Agenda® where homosexuals will make all Americans homosexual to weaken the country for an eventual Communist takeover? Or something?

“If you have to ask, you are probably already under its pernicious influence and blithely hop-scotching your way straight to Hell.” We can always count on Betty Bowers to set us straight.

They want others to accept them.

Well, yeah. Is that a problem?

What gives them the right to try and change society into what they want it to be?

I’m pretty sure that’s what they said about African Americans during the Jim Crow period.

Saying that homosexuality is natural because it occurs in the animal kingdom does not mean it is morally correct. Animals also eat each other alive, devour offspring, etc. Should we imitate those things as well because the animals do it?

So then do we at least agree that homosexuality occurs in nature and then is, by definition, natural?

As for morality, let’s not get cocky. For barbarism, no one beats humans. Only humans have invented war.

But to address your point: eating someone causes harm. Homosexuality doesn’t cause harm. Simple, right?

From an evolutionary perspective how does homosexuality further the development and distribution of the human species? It cannot. Homosexuality would obviously work for self extermination. … How is it natural if what it leads to is self destruction?

Homosexuality has been well documented in 500 animal species. Your concern about evolution is laudable, and yet it has stumbled along for three billion years just fine without your help. But thanks for asking.

Instead of speculating, why not see what the experts think?

As we’ve seen, homosexuality is natural and widespread. Why speculate that it’s a learned behavior just in humans?

Let me propose a simple rule: if it causes harm, we should minimize it. Lying causes harm; homosexuality doesn’t. Simple, right?

They are already free to marry a person of the opposite sex, the same as anyone else.

The Colored folks had their water fountains and schools, just like the White folks did. No problem, right? Golly, Jim Crow laws aren’t so bad when you reframe them like that!

For homosexuals to advocate redefining marriage so it can include union between a man and man, and a woman and a woman, and to have it protected legally, is to want special rights for them.

Quiz time: when was marriage last defined (or redefined)? If you said, “When God invented it in the Garden of Eden, and it’s been a constant ever since,” you need to read more history and less Bible.

In fact, it was redefined in 1967. Before that point, laws in many states prohibited mixed-race marriages. African Americans could marry someone of their race, the same as anyone else. That’s fair—who could complain about that, right? The Supreme Court disagreed, and anti-miscegeny laws in 17 U.S. states were overturned.

The apostle Paul made clear that marriage was second best and that chastity was preferable (1 Cor. 7:8–9). Marriage wasn’t even a Christian sacrament until the twelfth century. Throw in polygamy from the Old Testament, and it’s clear that the church’s attitude toward marriage is a moving target.

Once again, the church is late to the party.

If freedom to marry whomever you want to is the litmus test for marriage, then marriage will become meaningless as people redefine it to include those already married, siblings, children, animals, etc., as long as “love” is the defining characteristic.

Things that cause harm are bad, and things that don’t aren’t worth a lot of concern. We’ve already figured that one out.

The same-sex marriage proposal is to adjust the exceptions, not discard them all.

Homosexuals are using the civil rights movement to force their moral agenda on the rest of society … a moral agenda based on sexual behavior.

Unalienable rights are given by God, according to the Declaration of Independence in the U.S.A.

Whoa—you really don’t want to go there. Marriage isn’t being decided by a celestial court but a human one.

The topic is laws (how marriage is legally defined). Here’s another quiz: The Declaration of Independence says that “Governments are instituted among Men, deriving their just powers from …

Of course, the last one is the correct answer. The government doesn’t turn to God for its authority but to the people (which is actually pretty empowering).

What about necrophiliacs, and those who practice bestiality? They also are defined by their sexual behavior. Should they also be protected legally? If not, why not?

We have laws against behavior that hurts people. Wow. Why is this hard?

Anyway, who cares? What’s the downside to same-sex marriage? I’m married, and it wouldn’t affect me at all. If it bugs you, tell straight people to stop having gay babies.

Men will always be mad,
and those who think they can cure them
are the maddest of all.
—Voltaire

February 25, 2013 Don’t Believe Christianity Until You Believe in Aliens
Recent Comments
2 Comments | Leave a Comment
Browse Our Archives
get the latest from
Cross Examined
Sign up for our newsletter
POPULAR AT PATHEOS Nonreligious
1