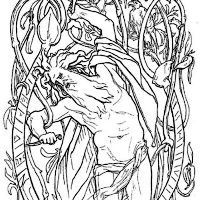 History records many dying-and-rising saviors. Examples from the Ancient Near East that preceded the Jesus story include Tammuz, Osiris, Dionysus, Adonis, Attis, and Baal. Here is a brief introduction.

Tammuz was the Sumerian god of food and vegetation and dates from c. 2000 BCE. His death was celebrated every spring. One version of the story has him living in the underworld for six months each year, alternating with his sister.

Osirus was killed by his brother Set and cut into many pieces and scattered. His wife Isis gathered the pieces together, and he was reincarnated as the Egyptian god of the underworld and judge of the dead. He was worshipped well before 2000 BCE.

Dionysus (known as Bacchus in Roman mythology) was the Greek god of wine and dates to the 1200s BCE. The son of Zeus and a mortal woman, Dionysus was killed and then brought back to life.

Adonis (from 600 BCE) is a Greek god who was killed and then returned to life by Zeus.

Attis (from 1200 BCE) is a vegetation god from central Asia Minor, brought back to life by his lover Cybele.

In Canaanite religion, Baal (Baʿal) was part of a cycle of life and death. Baal and Mot are sons of the supreme god El (yes, one of the names of the Jewish god). When El favored the death god Mot over Baal, the heat of the summer took over and Baal died. He was resurrected when his sister-wife killed Mot.

This is strong evidence either that the gospel writers knew of (and could have been influenced by) resurrecting god stories from other cultures or that these stories influenced the Jesus story when it was told from person to person.

Is it possible that Judea at this time was a backwater, and the people were unaware of the ideas from the wider world? That seems unlikely. The book of 2 Maccabees, written in c. 124 BCE, laments at how Hellenized the country was becoming. It says that the new high priest installed by Seleucid king Antiochus Epiphanes “at once shifted his countrymen over to the Greek way of life.” He “introduced new customs contrary to the Law” and “induced the noblest of the young men to wear the Greek hat.” The book complains about “an extreme of Hellenization and increase in the adoption of foreign ways” and the youth “putting the highest value upon Greek forms of prestige.”

In fact, the gospels themselves report that the idea of dying and rising again was a familiar concept. Jesus in the early days of his ministry was thought to be a risen prophet.

One Christian website does a thorough job attacking poorly evidenced parallels between Jesus and these prior gods. For example, was Dionysus really born to a virgin on December 25? Did Mithras really have 12 disciples? Was Krishna’s birth heralded by a star in the east? The author offers $1000 to anyone who can prove that any of these gods’ lists of parallels are actually true.

I’ll agree that there are strained parallels. One early work that has been criticized for too many claims and too little evidence is The World’s Sixteen Crucified Saviors by Kersey Graves (1875). The recent “Origins of Christianity and the Quest for the Historical Jesus Christ” by Acharya S also seems to be reaching, in my opinion.

I don’t have the expertise to weigh in on these many issues, so let’s grant the complaints and dismiss the many unsupportable specific parallels. What’s left is what really matters: that the Jesus story arose in a culture suffused with the idea of dying and rising saviors.

Many of these gods actually came after Jesus. That’s why the list above only includes dying-and-rising gods who are well known to have preceded Jesus. There are many more such gods—Mithras, Horus, Krishna, Persephone, and others—that don’t seem to fit as well. In fact, Wikipedia lists life-death-rebirth deities from twenty religions worldwide, but I’ve tried to list above the six most relevant examples.

In another post I explore the Dionysus myth more fully to show the parallels with the Jesus story. That post also notes how Justin Martyr (100–165 CE) not only admitted to the similarities but argued that the devil put them in history to fool us.

Okay, they’re all myths, but the Jesus story is true myth. This was the approach of C.S. Lewis, who said, “The story of Christ is simply a true myth; a myth working on us in the same way as the others, but with this tremendous difference, that it really happened, and one must be content to accept it in the same way, remembering that it is God’s Myth where the others are men’s myths.”

So you admit that the Jesus story indeed has many characteristics of mythology but demand that I just trust you that it’s true? Sorry, I need more evidence than that.

Just because Christianity developed in a culture that knew of other resurrecting gods doesn’t mean that Jesus wasn’t the real thing. Granted. But “you haven’t proven the gospel story false” isn’t much of an argument. Those who seek the truth know that proof is impossible and try instead to find where the evidence points.

And here’s where the evidence doesn’t point: that humans worldwide invent dying-and-rising saviors … except in the Jesus case, ’cause that one was real!

I found that God never began to hear
my prayer for liberty until I began to run.
Then you ought to have seen
the dust rise behind me
in answer to prayer.
— Frederick Douglass

(This is a modified version of a post originally published 4/15/12.)

March 27, 2013
Women at the Tomb Are Weak Evidence for the Resurrection
Next Post