The U.S. Constitution is 100 Percent Secular—or Is It? 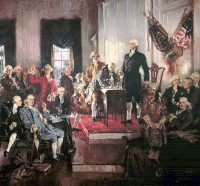 In other blog posts, I’ve made the point that the secular U.S. Constitution prohibits the government from getting involved with religion, which makes the best environment for both atheists and Christians. However, on several occasions, I’ve gotten pushback that the Constitution isn’t secular. Let’s investigate this claim.

First consider a historic document that is easily seen to be religious, the Mayflower Compact (1620). It’s quite short, and the majority of the body is here:

Having undertaken, for the Glory of God, and advancements of the Christian faith and honor of our King and Country, a voyage to plant the first colony in the Northern parts of Virginia, do by these presents, solemnly and mutually, in the presence of God, and one another, covenant and combine ourselves together into a civil body politic.

This is one of the documents that David Barton likes to use while bending history to take on his preconception of America as a Christian nation. There are also several federal Thanksgiving declarations that acknowledge the Christian god. For example, George Washington in 1789 created the first national Thanksgiving Day with this statement:

[Congress requests that the president] recommend to the People of the United States a day of public thanksgiving and prayer to be observed by acknowledging with grateful hearts the many signal favors of Almighty God.

The constitution of the Confederate States (1861) was adopted with few changes from the U.S. Constitution, one being the addition of “invoking the favor and guidance of Almighty God” in the preamble.

However, when we read the U.S. Constitution, this overtly Christian language isn’t there. Neither is the vaguely deist language present in the Declaration of Independence. It’s 100 percent secular. It’s not God making this constitution; it begins, in big letters, We the People. In fact, Article 6 says in part, “no religious Test shall ever be required as a Qualification to any Office or public Trust under the United States.”

But is it secular? Some Christians assert that it’s not. The first example is from Article 1:

If any Bill shall not be returned by the President within ten Days (Sundays excepted) after it shall have been presented to him, the Same shall be a Law.

In other words, it recognized Sunday as a holiday. The second example is the wrapup in Article 7:

done in Convention by the Unanimous Consent of the States present the Seventeenth Day of September in the Year of our Lord one thousand seven hundred and Eighty seven.

In other words, it replaces AD (Anno Domini—“in the year of our Lord”) with its English translation, as was customary for formal documents at the time.

That’s it?? Those are the powerful counterexamples? Compare this to the Mayflower Compact—a constitution with some balls that not only affirmed God’s existence but said that the entire project was for his glory.

The final irony is that “in the year of our Lord” isn’t even correct from a Christian standpoint. The few clues we have of Jesus’s birth in the gospels make clear that he wasn’t born in the year 1 but probably around 5 BCE.

So, yes, the Constitution does reflect the customs and calendar of the people of the time. But it’s still obviously and boldly secular. Isn’t that the best for everyone who is governed by it?

(In honor of the upcoming anniversary of the signing of the Constitution, this is a modified version of a post originally published 1/30/12.)