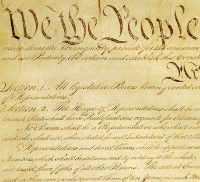 Paul Kurtz of the Center for Inquiry has said that 94 national constitutions are explicitly neutral on religion, with the U.S. Constitution being the very first. It’s frustrating that the secular nature of the Constitution is now being second guessed, when that trait is the friend not only of the atheist and non-Christian but also of the Christian.

History revisionists like David Barton (whose book The Jefferson Lies was recently recalled by its Christian publishing house for historical inaccuracies) imagine that America was founded on biblical principles.

The Constitution is full of biblical inspiration, he says:

You look at Article 3, Section 1 [sic], the treason clause. Direct quote out of the Bible. You look at Article 2, the quote on the president has to be a native born? That is Deuteronomy 17:15, verbatim. I mean, it drives the secularists nuts because the Bible’s all over it! … [We Christians] think it’s a secular document; we’ve bought into their lies. It’s not.

The Constitution not secular? There is no mention of deities, and the only mention of religion is to prohibit religious tests for public office in Article 6. But let’s investigate Barton’s claims.

First, the treason clause. In another video he makes clear what “direct quote” he’s talking about:

Compare that with the Constitution:

No Person shall be convicted of Treason unless on the Testimony of two Witnesses to the same overt Act, or on Confession in open Court (Art. 3, Sect. 3).

That’s the great wisdom that the founding fathers had to consult the Bible for—that you need at least two witnesses for an important crime? And that’s hardly a direct quote.

Consider what the Bible is talking about in this chapter: if anyone worships a god besides Jehovah, you are to stone them to death, with the witnesses the first to cast the stones. Death penalty for worshipping the wrong god? Uh, no—that’s about as unconstitutional as it comes.

In Barton’s second point, he compares

Be sure to appoint over you a king [Jehovah] your God chooses. He must be from among your fellow Israelites. Do not place a foreigner over you, one who is not an Israelite (Deut. 17:15).

No Person except a natural born Citizen, or a Citizen of the United States … shall be eligible to the Office of President (Art. 2, Sect. 1, Clause 5).

That’s not a “verbatim” copy. That’s not even a rough approximation. The United States is to pick a king that God chooses?!

No, David, what “drives the secularists nuts” is your blatant lies. Do you assume your audience is too ignorant to know the truth or too stupid to care about it?

There are lots more Barton claims, but he’s a waste of time. If the founding fathers had wanted America to be governed by Christian or biblical principles, they would have said so in the Constitution.

Compare it with the constitution of the Philippines, which implores the aid of “the Almighty God,” or Malaysia, which makes Islam the official religion, or Nigeria, which declares that it is a “nation under God,” or even the new constitution of Egypt, which makes Islam the official religion and Islamic Sharia the “principle source of legislation.”

The signers of the Constitution knew full well how to make religious constitutions since these same founding fathers helped to create constitutions in their states. Maryland granted religious protection for Christians only, New Jersey referred to “the inestimable privilege of worshipping Almighty God,” Pennsylvania required office holders to acknowledge that the Bible was divinely inspired, and Vermont required all men to declare “by the ever living God” that they will honorably carry out civic responsibilities such as voting.

That’s what the Constitution would’ve looked like if the founding fathers had wanted it to be religious. By contrast, the U.S. Constitution begins “We the People.” By not referring to God, it says volumes.

I think we need to have a government
that respects our religions.
I’m really tired of being lectured
about respecting every other religion on the planet.
I want them to respect our religions.
— Newt Gingrich, while campaigning for president in 2012