Happy Anniversary of the World Not Ending

Happy Anniversary of the World Not Ending May 21, 2013 Bob Seidensticker 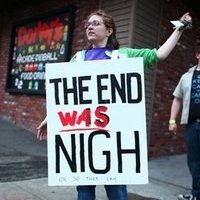 Congratulations—we all made it! If you’re reading this, the world didn’t end on Pentecost (May 19, 2013) as Ronald Weinland predicted. If you want to find out why the world will end two days ago, you can read all about it.

But don’t mock Weinland. Here’s what he said to mockers in the heady days before his spectacular failure: “you will suffer from sickness that will eat you from the inside out, and you will die; your death will not be quick” (video, 1:15).

The world also didn’t end on Pentecost 2012, Weinland’s previous prediction. He’s since tap-danced away from his latest embarrassment with a much vaguer statement about the future: “It is my hope that next Pentecost we will see the return of Jesus Christ.”

If this all sounds familiar, you’re probably thinking of our old pal Harold Camping, winner of the 2011 Ig Nobel Prize in mathematics. Yes, Harold and his Family Radio ministry got us in a tizzy about the world ending. He spent more than $5 million on 5000 billboards announcing the rapture on May 21, 2011, then Armageddon, and then the end of the world five months later. (Of course, when I say “he spent,” I mean “he, using not his own money but money donated by his followers.”)

Today is the two-year anniversary of Camping’s rapture not happening.

Despite Camping’s confidence, some of us weren’t buying it. During the months leading up to the claimed rapture, the Ask an Atheist radio program highlighted the insanity with a weekly “Countdown to Backpedaling” review of the latest on the story. Members of Seattle Atheists helped spread the word with a “The end is nigh” sandwich board sign, and they collected money to help during Armageddon.

Who better than atheists to help out after a rapture, right? You can be pretty sure that they’re not going anywhere.

When the end didn’t come as predicted, the sign was updated (as shown in the photo above) and the money donated to Camp Quest Northwest to help raise a new generation who will be a bit more skeptical of claims without evidence.

While Armageddon didn’t happen, Camping has had his own slow-motion Judgment Day. Assets of Family Radio have dropped from $135 million in 2007 to $29 million in 2011 (IRS 990), they’ve sold their three largest radio stations, and donations have dropped 70 percent since the false alarm.

It reminds me of prominent Seattle-area anti-gay pastor Ken Hutcherson. In a news story reporting Hutcherson’s battle with cancer, one comment read, “Ain’t karma a bitch?”

I wrote about the aftermath of Camping’s failure here. What infuriated me most was Family Radio not asking themselves, “What would you do if there were no tomorrow?” Because, for them, there wouldn’t be after May 21. Many of their followers got themselves right with God, selling all their assets and using the money to spread Camping’s message. Curiously, Family Radio didn’t … almost as if they didn’t believe their own message. Given the actions that they knew their followers were taking (which included at least one attempted murder/suicide on May 22), doesn’t that sound like fraud?

Imagine this: what if Camping had put his money where his mouth was? Since he wouldn’t need anything after the rapture, he’d have liquidated his assets and created a foundation to help people in need. And now, instead of it being a pathetic memory of an old man’s overconfidence in numerology, it’d be an ongoing foundation.

Every private foundation is obliged to distribute five percent of its assets annually. If we imagine that he started with $100 million two years ago, that’s five million dollars each year to actually help people. Y’know, like Jesus did. But that opportunity was missed, and Family Radio will now be remembered most for the harm it did.

Don’t forget that the first prediction of the end times failed as well:

There be some standing here, which shall not taste of death, till they see the Son of man coming in his kingdom (Matt. 16:28).

Gotcha! I’m kidding, of course! “The sky is falling” is as compelling to the Chicken Littles of today as it’s been for the last 2000 years.

If you don’t want your religion laughed at,
don’t have such funny beliefs.