Christianity Can Rot Your Brain 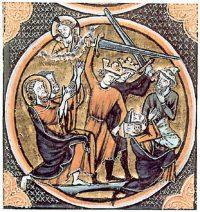 There’s a lot of killing in the Bible—the honest and wholesome kind. The God-commanded kind.

What are we to make of this violence? Apologist William Lane Craig takes a stab at justifying “The Slaughter of the Canaanites.”

Craig’s entire project is bizarre—trying to support the sagging claims of God’s goodness despite that deity’s passion for genocide—but he gamely has a go. Craig responds to the question, “But wasn’t it wrong to kill all the innocent children?”

If we believe, as I do, that God’s grace is extended to those who die in infancy or as small children, the death of these children was actually their salvation. We are so wedded to an earthly, naturalistic perspective that we forget that those who die are happy to quit this earth for heaven’s incomparable joy. Therefore, God does these children no wrong in taking their lives.

What’s this supposed to mean?? Does it mean that Andrea Yates was actually right that she was saving her five children from the possibility of going to hell by drowning them one by one in the bathtub? Does it mean that abortion is actually a good thing because those souls “are happy to quit this earth for heaven’s incomparable joy”? I hope none of Craig’s readers have followed up with this route to salvation.

It’s hard to believe that he’s actually justifying the killing of children, but there’s more. Let’s fillet Craig’s next paragraph:

So whom does God wrong in commanding the destruction of the Canaanites? Not the Canaanite adults, for they were corrupt and deserving of judgment.

I thought that genocide was wrong. Perhaps I was mistaken.

Not the children, for they inherit eternal life.

Yeah, right. Killing children is actually a good thing. (Are we living Orwell’s Nineteen Eighty-Four, where “War is Peace, Freedom is Slavery, Ignorance is Strength”?)

So who is wronged?

Ironically, I think the most difficult part of this whole debate is the apparent wrong done to the Israeli soldiers themselves. Can you imagine what it would be like to have to break into some house and kill a terrified woman and her children? The brutalizing effect on these Israeli soldiers is disturbing.

Uh, yeah. That was the big concern in my mind, too.

Can you believe this guy? My guess is that he is a decent and responsible person, is a good husband and father, works hard, and pays his taxes. But he’s writing this? It’s like discovering that your next-door neighbor is a member of the Ku Klux Klan.

This brings up the Christopher Hitchens Challenge (video). Hitchens challenges anyone to state a moral action taken or a moral sentiment uttered by a believer that couldn’t be taken or uttered by an unbeliever—something that a believer could do but an atheist couldn’t. In the many public appearances in which Hitchens has made this challenge, he has never heard a valid reply.

But think of the reverse: something terrible that only a believer would do or say. Now, there are lots of possibilities. Obviously, anything containing variations on “because God says” or “because the Bible says” could be an example.

Or, as in this case, “God supports genocide.”

In other words: Christianity can rot your brain.

June 10, 2013 The Long, Strange Story of the Trinity
Recent Comments
59 Comments | Leave a Comment
"The classical theists over at Strange Notions may not want to accept that, but that ..."
WCB God’s life is hell
"And 50% of the time makes a coin toss come up heads. On average. Praise ..."
Michael Murray Irresponsible use of the awesome power ..."
"I think you are correct that it isn’t a convincing argument. There was a blog ..."
Maltnothops God’s life is hell
"If you get the chance don't miss it."
Otto God’s life is hell
Browse Our Archives
get the latest updates from
Cross Examined
and the Patheos
Nonreligious
Channel
POPULAR AT PATHEOS Nonreligious
1