Illogic of the Garden of Eden Story

Illogic of the Garden of Eden Story June 24, 2013 Bob Seidensticker 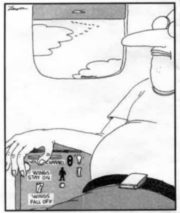 There’s a great Far Side cartoon with the caption “Fumbling for his recline button, Ted unwittingly instigates disaster.” The drawing shows some guy in an airplane seat, not paying attention as he reaches down to the buttons on the arm rest. There’s the light switch, the call button, and a switch for “Wings stay on” in the up position and “Wings fall off” in the down position.

In the Garden of Eden story, God is like the engineer who thought it smart to put the switch to jettison the wings in the arm rest. He knows that humans mustn’t eat from the Tree of the Knowledge of Good and Evil, so where does he put it? In with the humans.

Maybe God didn’t know how to childproof the Garden—he was new at parenting, after all. But some safeguards seem like common sense. Why not tell Adam and Eve not to believe the snake? Or step in once the snake spoke to Eve? Or make the fruit of the tree look or smell unappealing? Or put the tree far away? Or put a wall around it? Or, if it’s not good for anything, not make the tree in the first place? God knows how to establish effective guards, since he put cherubim with a flaming sword to keep Mankind out of the Garden after the fall. Then why not guard the tree to keep Adam and Eve away?

It’s like the James Bond movies where the bad guy captures Bond and arranges a slow death (like Goldfinger’s metal-cutting laser slowly working its way up the table between Bond’s legs) and then leaves. Bond always escapes. If Goldfinger were serious about eliminating Bond (he’s not—it’s Hollywood), he would have just shot him. If God were serious about the danger of Adam eating the fruit (he’s not—this is a just-so myth), he wouldn’t have put the tree in the Garden.

I know what you’re thinking. Why treat this ancient myth as if it’s actually history? Why worry about the logic of a 3000-year-old myth? Because, according to four in ten Americans, it is history.

The Documentary Hypothesis argues that the Garden of Eden story comes from the oldest parts of the Pentateuch (the first five books of the Bible) and was written around 950 BCE, while the six-day creation story was added almost 500 years later. To historians, this jumble of stories causes no problem. It’s fascinating to learn about what ancient cultures did. But the claim that Genesis is literally true runs aground in many places.

Old though the J source is, it seems inspired by other Mesopotamian myths that are far older. The 18th century BCE Sumerian Atra-Hasis epic is another creation myth. In it, one of the gods creates lesser deities to do the farm work, but they eventually refuse. The gods create humans to take over, but all is not perfect. After twice 600 years (600 is a round number in Mesopotamian base-60 representation), “The country was as noisy as a bellowing bull.” The god of the wind was eventually fed up: “The noise of mankind has become too much. I am losing sleep over their racket.” His solution: a plague, then a famine, and finally a flood.

In this story, mankind is created to tend the gods’ garden (as was Adam—see Gen. 2:15). Eventually, they annoy one god enough that he decides to rid the world of them with a flood (see Gen. 6 ff). Noah’s age at the time of the flood (600 years) also has a parallel.

Take the story at face value, and not only is the Bible contradictory about the creation, but God is culpable (with the story spun to make it Man’s fault). Alternatively, we can see it as a version of a story inspired by a much older version from that region of the world. If it doesn’t make complete sense, okay, but understand that it’s just myth. And if you stick the Garden creation myth with the six-day-creation myth, don’t be surprised when they don’t match up. Neither approach does much to bolster claims of historicity.

The church doesn’t like for people to grow up
because you can’t control grown-ups.
— John Shelby Spong

June 26, 2013 Illogic of the Garden of Eden Story (2 of 2)
Recent Comments
84 Comments | Leave a Comment
"I've been on a battlefield tour of Belgium and France. And yes, ordinance is routinely ..."
Ignorant Amos A response to evolution deniers: how ..."
"well there are ones that do, she is just intelligent. So hats off to your ..."
John Grove The Argument from Results (a new ..."
"FWIW, my wife, who is Jewish, has said for decades that Jews have one wish: ..."
Maltnothops The Argument from Results (a new ..."
"Training animals to help detect mines is pretty clever, though I imagine they'll graduate to ..."
Bob Seidensticker A response to evolution deniers: how ..."
Browse Our Archives
get the latest updates from
Cross Examined
and the Patheos
Nonreligious
Channel
POPULAR AT PATHEOS Nonreligious
1