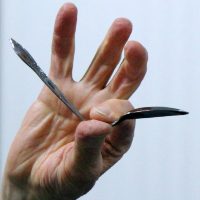 Remember Uri Geller? He was the psychic (or entertainer) who bent spoons and performed similar demonstrations in the 1970s and later. He claimed that extraterrestrials gave him paranormal powers, but wet blankets like stage magician James Randi stated that all of Geller’s claimed paranormal demonstrations were done with conventional stage magic. Randi showed this by publicly duplicating all of Geller’s tricks.

Geller responded: “Sure, there are magicians who can duplicate [my performances] through trickery.” In other words, just because others can do these things as tricks doesn’t mean that he’s not doing them using paranormal powers. But Randi observed that if Geller was actually doing what he claims, “He is doing it the hard way.”

It doesn’t much matter which Bible story the apologist was trying to shore up—the defense is the same. It’s the Uri Geller defense. Geller would say that just because they did his stunts through tricks doesn’t mean that he’s not doing them for real. And the Bible apologist says that just because other cultures anticipated some of the Bible’s fundamental miracle claims long before a Bible story was written doesn’t mean that that Bible story isn’t for real.

Some apologists try to dismiss the earlier stories, but early church father Justin Martyr tried to spin the similarities between Jesus’s virgin birth claim and those of other gods to his advantage. Why should the Greeks dismiss this miracle claim of Jesus, Justin asked, when they make similar claims about their own gods?

About the Jesus resurrection story, Justin speculated that the similar Dionysus story was planted in history by the devil himself. (I give Justin’s arguments in more detail here.)

Another angle is to emphasize that each Bible story is different from its precedents. Of course it’s different—if the Jesus story were identical to that of Dionysus (say), we’d call him Dionysus instead of Jesus. The question is: how can we trust a Jewish or Christian story as history when it came out of a culture swimming with older (false) stories with the same supernatural claims?

How we deal with similar claims.

Psychics might really be talking to the dead. Though that’s not where the evidence points, desperate customers want the psychics’ story to be true.

Crop circles might really be made by extraterrestrials. Though that’s not where the evidence points (creators have documented how they do it), crop circle enthusiasts dismiss the mundane explanation.

Uri Geller might be for real, though that’s not where the evidence points. Similarly, the Bible miracle stories might be true, but similar miracle stories in nearby cultures make copying by Bible authors the best explanation.

We can’t prove that the Bible’s miracle claims aren’t for real, despite all the precedents, but that’s the way to bet. The plausible natural explanation makes the supernatural explanation unappealing and unnecessary. Only someone with a desire to support a preconception wouldn’t follow the evidence where it leads.

I don’t want to argue
with people who believe the world is flat.
— Episcopal bishop John Shelby Spong

Nonreligious
How Do You Decide What to Believe?
Cross Examined