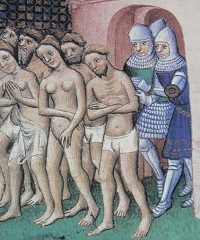 What does your departure say to your fellow parishioners, and how will they respond?

For example, Rich Lyons (from the Living After Faith podcast) left his 20-year career as a Pentecostal minister. His departure cost him everything: respect in the community, house, job, career, marriage. He needed five years to get over his PTSD. And his experience is not uncommon for those leaving some denominations.

Why should it be this way? When you leave a company, they give you a going-away party. You can still hang out with your old workmates. Why isn’t it the same when you leave a Christian community? Why instead are apostates often cut off from their friends within the church and even their families?

I got some insight into this from an anecdote by Stephen King. In his book On Writing, he talks about a different kind of outcast. In small-town Maine in the early sixties, life wasn’t easy for a socially-awkward girl he calls Dodie.

For the first year and a half of high school, Dodie wore a white blouse, long black skirt, and knee socks to school every day. The same blouse, skirt, and socks. Every day. The blouse gradually became thinner and yellowed, the skirt frayed and patched.

The other girls kept her in her social place, first with concealed taunts, then with overt teasing. If you can’t earn a spot above someone else, you can push that person beneath you, and the other girls made sure that Dodie stayed in her place at the bottom.

But something happened during Christmas break sophomore year. Whether because of money she’d saved up or a Christmas windfall, Dodie returned to school changed. She wore stockings over newly shaved legs, her hair was permed, and her clothes were new—a fashionably short skirt and a soft wool sweater. She even had a confident new attitude to match her appearance.

This change in the social order couldn’t stand. The other girls didn’t celebrate her accomplishment. They turned on her. Under the relentless teasing, her new smile and the light in her eyes faded.

By the end of that first day, she was the same mouse at the lowest rung, scurrying the halls between classes, her books pressed to her chest and her eyes downcast.

As the semester progressed, Dodie wore the same clothes. Every day. They faded as their predecessors had, she kept to her previous place, and the teasing returned to normal. Someone had made a break for it and tried to escape, but they’d been brought back in line. The social structure was intact once again.

Christian apostates are different because they successfully leave, but some Christian churches take the next best option. Potential apostates within these communities know that they would leave behind more than just the customs and obligations of their sect. As Rich Lyons experienced, these communities use the stick of shunning, in which friends and even family must avoid all contact with apostates.

Thankfully, this draconian punishment is a threat for a small minority of Christians, but Church congregations are societies, just like high schools. High school hierarchies aren’t something you can just walk away from, like membership in a Rotary Club or art museum. High school societies can feel threatened and respond, and the same is true for churches.

June 19, 2013
Religion in Public Schools: What Does the First Amendment Allow?
Next Post