Armageddon Within Our Lifetime? (2 of 2) 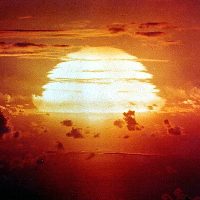 In part 1, we considered the signs that the gospel of Luke gives for the end times. Pestilence, famine, earthquake? Despite what excitable television personalities would like to believe, these are not increasing, and modern technology is doing a lot more than Christianity ever did in addressing them.

There’s one more in Luke’s list that we should consider: war.

There are always lots of conflicts in the world. Are they increasing?

Steven Pinker looks at history and draws an optimistic conclusion in his TED video “The Surprising Decline in Violence” (2007). He says, “Today, we are probably living in the most peaceful time in our species’ existence.”

He argues that violence has dropped over time and that this can be seen on a fractal scale. That is, violence has consistently dropped whether you look over the long term (millennia), medium term (centuries), or short term (decades).

I confess that I’m not as optimistic. I can’t argue with these facts, but there are other facts (50 million people dead from World War II) that argue that we humans still need a lot of therapy. The best way that I see to illustrate our progress is to note that the average Joe in America today lives a far more comfortable and secure life than kings from the Middle Ages.

How do we get it so wrong?

Given these facts, most of which are well known, why are we susceptible to the Chicken Littles of the world? Why do we think things are getting worse when they’re clearly getting better? Pinker answers:

This touches a bit on the subject of my book, Future Hype: The Myths of Technology Change (2006). We focus on the latest technology and its impact on our lives, when this is minor compared to the social upheaval that the Industrial Revolution caused. We have temporal myopia: that which is happening in front of us we see clearly, but we think little of the past.

Rules of the game

Christian pundits know the emotional buttons to push to keep the fire stoked and themselves relevant. Even when they’re plainly and laughably wrong, some are able to stay relevant.

The apocalyptic book 88 Reasons the World Will End in 1988 sold 4.5 million copies. Oops—didn’t happen. Did that spectacularly bad prediction poison the well for future end-times prophets? Not at all. It’s a topic that can always be made fresh for a new generation.

Hal Lindsey and Pat Robertson made predictions that didn’t come true, but they’re still in the game. Evidence and accuracy are apparently malleable in this world.

That’s surprising, because the Bible itself cautions against charlatans. “We who teach will be judged more strictly” (James 3:1). The Old Testament punishment for a false prophet was severe, with no mention of second chances. God said:

A prophet who presumes to speak in my name anything I have not commanded … is to be put to death. You may say to yourselves, “How can we know when a message has not been spoken by the Lord?” If what a prophet proclaims in the name of the Lord does not take place or come true, that is a message the Lord has not spoken. (Deut. 18:20–22)

No, death isn’t the option. And consequences for ridiculous fear mongering apparently aren’t an option either. When close to half of Americans anticipate the second coming, these TV personalities will still be able to push Christians’ buttons.

Folks, the end time prophesies are literally exploding before our eyes.
That tells me the rapture of the church is even closer than we dared believe. …
I’m so convinced that we are in the final days of this age.
— Hal Lindsey (2011) 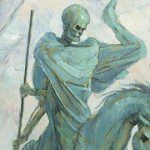