How Do We Know the Moon ISN’T Made of Green Cheese? 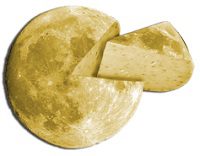 In a fable going back centuries within various cultures, a simpleton sees the reflection of the full moon in water and imagines that it’s a wheel of green (that is, unaged) cheese. It’s a tale that we often pass on to our children and that we discard with time, like belief in the Easter Bunny.

But how do you know that the moon isn’t made of green cheese?

Physicist Sean M. Carroll addressed this question in a lecture. After a few moments exploring physical issues like the moon’s mass, volume, and density and the (dissimilar) density of cheese, he gave this frank broadside:

The answer is that it’s absurd to think the moon is made of green cheese.

This is not a proof, there is no metaphysical proof, like you can prove a statement in logic or math that the moon is not made of green cheese. But science nevertheless passes judgments on claims based on how well they fit in with the rest of our theoretical understanding.

Might the moon actually be made of cheese? Science doesn’t make unconditional statements, but we can assume the contrary with about as much confidence as we have in any scientific statement.

Might Jesus have been raised from the dead? Sure, it’s possible, but that’s not where the facts point. Aside from satisfying a preconception, why imagine that this is the case?

When a religion is good, I conceive it will support itself;
and when it does not support itself, and God does not take care to support it
so that its professors are obliged to call for help of the civil power,
‘tis a sign, I apprehend, of its being a bad one.
— Benjamin Franklin

(This is a modified version of a post originally published 11/7/11.)