Objective Truth: Does the Bible Speak Plainly About Homosexuality? 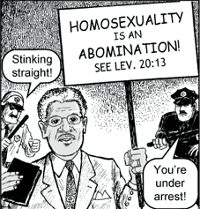 What do we make of this? Both sides use the same Bible. Is the Bible then ambiguous?

Before you conclude that it is, consider this exchange during an interview with Greg Koukl (Unbelievable podcast for 7/13/13). A caller asked about ambiguity in the Bible and gave as an example the recent debate about gay Anglican clergy in civil partnerships becoming bishops. (In the beginning of 2013, the church decided to allow it as long as they remained celibate, though celibacy isn’t demanded of straight priests.) There were honest, well-intentioned Christians in the Anglican and Roman Catholic churches arguing both sides of the debate using the same Bible.

Koukl used arithmetic as a counterexample. Suppose one person argued that 2 + 2 = 4, while another said that 2 + 2 = 9. The honesty and decency of the participants is irrelevant—there are objective truths here, and these two antagonists can’t both be right.

I agree. But are there also objective truths in the gay bishop case? I see none, and I see no evidence that the Bible’s position on this matter is clear.

Koukl says that, like checking which sum is correct, we must look to the Bible to see what it says.

In this regard, there is very little ambiguity as to what the bible teaches … between the Genesis passage, the Leviticus passage, and the Romans passage, there is a very, very clear statement about homosexuality.

That so? Let’s check the Bible to see what this “clear statement” is.

The Genesis passage is Gen. 19:4–9, the Sodom and Gomorrah story. But remove the presupposition that the lesson is “homosexuality is bad” and see what crime actually is: rape. For the details, see my posts here and here. This informs us about the topic at hand—which, let’s remember, is a committed gay couple—not at all.

There are two Leviticus passages.

“Abomination”? Ouch—that sounds pretty harsh. But look at the other things that are labeled in Leviticus as abominations—eating forbidden food, sacrificing blemished animals, performing divination, women wearing men’s clothes, and so on. Clearly, these are ritual abominations, out of date tribal customs. These are bad by definition, not because they actually hurt anyone.

Christians don’t care about these ancient customs today. The logic is that the sacrifice of Jesus got rid of them (see, for example, Heb. 7:11–12). Fair enough—then get rid of them. Don’t sift through them to keep a few that you’re nostalgic for.

I’ve also written in detail about this here.

Finally, here is the Romans passage.

Because of [mankind’s sinful desires], God gave them over to shameful lusts. Even their women exchanged natural sexual relations for unnatural ones. In the same way the men also abandoned natural relations with women and were inflamed with lust for one another. Men committed shameful acts with other men, and received in themselves the due penalty for their error. (Rom. 1:26–7)

Notice the verbs here: God “gave them over,” women “exchanged,” men “abandoned.” Paul imagines going from the natural (men with women) to the unnatural. That is, he imagines straight people engaging in homosexual sex. Yes, that is weird. And, strike three, that has no bearing on what we’re talking about: homosexuals doing what comes naturally.

After referring to these passages, which do not address the question at hand, Koukl wraps up:

The evidence is there to come to a clear conclusion about what the spiritual sums are with regard to homosexuality. That people who are dedicated, who pray, who are honest, who have a relationship with God don’t agree on that, does not mean that the text is unclear, and what one needs to do in those kinds of things is go back to the text. This is not a case where God has been hidden in the information.

I’m a little surprised to say this, but I agree with Koukl here. There is no ambiguity. It’s clear both what is said in the Bible and what is not said. These passages say nothing about the case of gay Anglican clergy that is the topic.

This is a case where a lot of people have changed their mind under public pressure.

Social improvement comes from society. We used to chop off hands for stealing, we used to burn witches, and we used to enslave people. It’s not thanks to the Bible (which doesn’t change) but to society (which does), that we’ve put that behind us. “Public pressure” isn’t necessarily a bad thing, but we must weigh the consensus of our community to see if it’s going in the right direction or not.

For people like Koukl, the Bible is a sock puppet that they can make say whatever they want.

If you are depressed after being exposed to the cosmic perspective,
you started your day with an unjustifiably large ego.
— Neil DeGrasse Tyson

(I recommend a resource that has been helpful with this post: “Homosexuality and the Bible” by Rev. Walter Wink.) 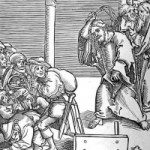