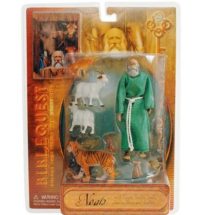 I discussed the logic (or lack of logic) in the Garden of Eden story in two recent posts. The story of Noah and the flood is another fascinating tale from this period and from the same sources.

Let me again address the question many are probably asking: given that this is just an ancient myth, why evaluate it as if it’s history (which I will be doing)? Because for 60% of Americans it is literally, word-for-word true. For Protestants, that figure is 73%. For Evangelicals, it’s 87%.

Robert Price in The Reason-Driven Life (pages 102–106) gives a summary of what came before.

[The Noah flood story] is a derivative version of demonstrably much older flood epics from the same area, including the Gilgamesh epic [Sumerian], the Atrahasis epic [Akkadian], the story of Xisuthros [Sumerian], and that of Deucalion and Pyrrha [Greek], all of whom survived the world-devastating flood by setting sail in a protective ark, most of them bringing the animals along for the ride. We find all the familiar details: The decision of the gods to flood the world for some offense committed by the human race, the stipulated dimensions of the ark, the provision for the animals, the onset of the rains, the number of days the flood lasted, the naming of the spot the ark came to rest, the sending forth of birds to find dry ground, the emergence of the refugees, their sacrifice, and the promise of the gods never to doom the world thusly ever again. It’s all there, at least most of it in most versions.

Yes, just because there were prior flood stories from that region doesn’t mean that the Noah story didn’t actually happen. And yes, just because the Sumerian cosmology both preceded Genesis and is the same as that described in Genesis—it allows water from below (“the springs of the great deep burst forth”) and above (“the floodgates of the heavens were opened,” both from Gen. 7:11)—doesn’t mean that the Genesis account was copied.

But in both cases, that’s certainly an enormous clue.

As with the two Genesis creation stories—six days vs. Garden of Eden—a flood story from the older J source (about 950 BCE) is squashed with one from the P source (500 BCE) to make an unhappy compromise. (I discuss the Documentary Hypothesis and the Old Testament’s different sources here.)

The clumsy intermingling of the two stories can be seen, for example, in Genesis 8. The first five verses (the P account) tell about the water receding, the ark coming to rest on Ararat, and land becoming visible. The next seven verses (from J) make clear that land is not yet visible when Noah sent out birds to check for land, but “there was water over all the surface of the earth.”

According to Price, these two sources each had their partisans, so each had to be preserved. Better to merge them, however imprecisely, than to drop a beloved story element.

It’s fun to compare the Noah story with science and history as we know it. Here are some of the problems that I’ve come across. Add any that I’ve overlooked in the comments.

And let’s simply bypass the problem that geology tells us that there was no global flood.

Of course, God could’ve solved any of these problems with a miracle, but then why tell the story as if Noah and his family did everything? Why not just have God poof into existence a new world with everyone painlessly dead except Noah and his family? Because it’s just a story written with no concern about modern science.