Who Cares What the Bible Says About Gays? Look What it Says About Banks!

Who Cares What the Bible Says About Gays? Look What it Says About Banks! July 24, 2013 Bob Seidensticker 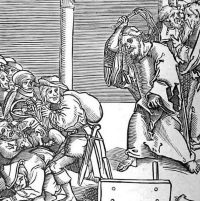 The second-century Apocalypse of Peter surveys the eternal punishment that God delivers to people according to their crimes. In his visit to hell, Peter saw blasphemers hanging by their tongues, murderers bitten by snakes, liars with fire in their mouths, the greedy rolling on stones that were razor sharp and red hot, transvestites and lesbians thrown off a cliff repeatedly, and apostates roasted.

“And in another great lake, full of pitch and blood and mire bubbling up, there stood men and women up to their knees: and these were the usurers and those who take interest on interest.” (The Apocalypse of Paul changes the punishment to consumption by worms.)

Who says that religious studies can’t be fun?

The Bible says nothing about two loving homosexuals wanting to get married—see my recent post here—but it says plenty about usury. (Usury can be either charging excessive interest or charging any interest on a loan.) Why get in a lather about vague statements about homosexuality in the Bible when it’s quite explicit about usury? Shouldn’t the Christian anti-gay crowd focus their attention here instead?

The vision of hell from the Apocalypse of Peter isn’t in the Bible, but all the sins that it discusses are there, including usury. Here’s how Ezekiel describes an evil man.

He defiles his neighbor’s wife. He oppresses the poor and needy. He commits robbery. He does not return what he took in pledge. He looks to the idols. He does detestable things. He lends at interest and takes a profit. Will such a man live? He will not! Because he has done all these detestable things, he is to be put to death; his blood will be on his own head (Ez. 18:11–13).

Given the crimes that he categorizes it with, Ezekiel clearly doesn’t like lending with interest.

(This clear distinction between “us” and “them” is also present in the rules for slavery. For Jews, it was indentured servitude; for non-Jews, it was slavery for life.)

The Old Testament makes clear that, aside from foreigners, lending with interest is forbidden.

Wikipedia summarizes the progression of thinking about usury within Christianity. First, clergy were forbidden from engaging in usury in 325, though it was defined as interest greater than one percent per month. Next, this prohibition was extended to the laity. In the Middle Ages, things became more strict.

[The Third Lateran Council in 1179] decreed that persons who accepted interest on loans could receive neither the sacraments nor Christian burial. Pope Clement V made the belief in the right to usury a heresy in 1311, and abolished all secular legislation which allowed it. Pope Sixtus V condemned the practice of charging interest as “detestable to God and man, damned by the sacred canons and contrary to Christian charity.”

We’ve made banking (including lending with interest) a central part of our modern economy, but the problem of wrongful lending still exists. Predatory lending is lending with unfair or abuse terms.

Payday loans are another issue. According to the FDIC, “The typical charge is $15 to $20 per $100 advanced for a two-week period, resulting in an APR [annual percentage rate] of nearly 400%.” A Muslim player on the Newcastle United soccer team has refused to wear his club’s jersey because the sponsor is short-term loan company Wonga, which charges interest rates of up to 6.56% per day.

Payday loans have declining in the U.S. to $3.3 billion per year, though economics and policy drove this, not Christian outrage.

As you may have guessed, lending with interest isn’t a primary issue for me. I am outraged when powerless people are gouged by excessive interest rates, but that isn’t on topic for this blog. What does concern me is consistency. How can you rely on the Bible to support a stand against homosexuality and not be anti-usury? It’s not like usury existed thousands of years ago but doesn’t in our modern economy.

July 22, 2013
Objective Truth: Does the Bible Speak Plainly About Homosexuality?
Next Post 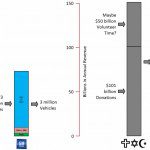 July 26, 2013 Religion: Billions Into a Black Hole
Recent Comments
38 Comments | Leave a Comment
Browse Our Archives
get the latest from
Cross Examined
Sign up for our newsletter
POPULAR AT PATHEOS Nonreligious
1