James Dobson Needs My Money (and an Education) 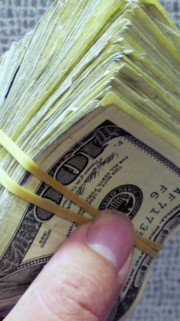 James Dobson, founder of Focus on the Family, was good enough to send me a letter a few years ago. Not a personal letter—he basically just wants me to give him some of my money—but a letter nonetheless. He outlined some of his views about the Christian foundation our country was built on, reported how our country is going to hell in a jet-propelled handbasket, and made the irresistible swipe at homosexuality.

In case he forgot to send you one, I’ve highlighted a few interesting bits of his letter to reply to.

America is a Christian Nation! (Or something.)

Our Founding Fathers clearly understood the relationship between Christian Truth and the stability of our (then) new nation. Here are just a few quotes that express that essential connection.

And he goes on to quote mine the founding fathers’ writings to find their most pro-Christian statements. This desire is irresistible to many history revisionists today, so let me try to apply the brakes.

When pundits bring up quotes from the founders, you know that they’re out of arguments. The U.S. Constitution is the law of the land, regardless of what the founders thought, wrote, or wanted. They had their chance to define how the country should be run, and they seized it. That document was revolutionary at the time and now, with a few amendments, effectively governs us more than two centuries later. It supersedes any other writings of the founders. Christianity has its place within society thanks to the Constitution, not vice versa.

Thomas Jefferson, … revisionists tell us, wanted a “wall of separation” to protect the government from people of faith.

No need for revisionists—Thomas Jefferson himself talked about “a wall of separation between church and state.” And, to be precise, the First Amendment protects the people (whether or not of faith) from the government, not the other way around.

Dobson then goes on to give a long quote by Abraham Lincoln. Well, not really by Lincoln. This was a Senate resolution for a National Fast Day signed by Lincoln. And this was the same Lincoln who said, “When I do good, I feel good; when I do bad, I feel bad. That’s my religion.”

This was the same Lincoln who said, “The Bible is not my book, and Christianity is not my religion.”

This was the same Lincoln who said, “My earlier views of the unsoundness of the Christian scheme of salvation and the human origin of the scriptures have become clearer and stronger with advancing years, and I see no reason for thinking I shall ever change them.”

The private Lincoln wasn’t the strong Christian that Dobson imagines. (And it wouldn’t change the Constitution if he were.)

We are witnessing an unprecedented campaign to secularize our society and “de-moralize” our institutions from the top down. … Most forms of prayer have been declared unconstitutional in the nation’s schools. The Ten Commandments have been prohibited on school bulletin boards. … In this wonderful Land of the Free, we have gagged and bound all of our public officials, our teachers, our elected representatives, and our judges.

I don’t want to see Christian citizens gagged; I want them to have the same public speech rights that I do. But when you’re acting as a public official, teacher, or elected representative, the rules are different. The First Amendment demands that you create an unbiased environment. Evangelism with prayer or religious documents is forbidden. Dobson somehow finds this a shocking new realization, but the First Amendment was adopted in 1791.

As a secularist, I know when to stop. I’m only asking that the First Amendment be followed. I want no Christian preferences—such as “In God We Trust” as the motto, prayers before government meetings, Creationism in schools, crosses on public land, and so on—but when we have reached that secular situation, I will stop. I’m not striving for a society where Christianity is illegal. (See what a good friend a secular Constitution is for the Christian?)

But I see no stopping point on the other side, no unambiguous standard that all Christians are striving for. If they got prayer back in schools, what would be next?

The sky is falling. Or not.

Since we have effectively censored their expressions of faith in public life, the predictable is happening: a generation of young people is growing up with very little understanding of the spiritual principles on which our country was founded. And we wonder why so many of them can kill, steal, take drugs, and engage in promiscuous sex with no pangs of conscience.

I wonder what happens when Christianity fades away? Does that society devolve into the post-apocalyptic Mad Max world that Dobson imagines?

Let’s compare other Western societies to find out. Looking at quantifiable social metrics (such as homicides, incarceration, juvenile mortality, STDs, abortions, adolescent pregnancies, marriage duration, and income disparity) in 17 Western countries, a 2009 study concluded: “Of the 25 socioeconomic and environmental indicators, the most theistic and procreationist western nation, the U.S., scores the worst in 14 and by a very large margin in 8, very poorly in 2, average in 4, well or very in 4, and the best in 1.”1

The obligatory attack on the gays

It is breathtaking to see how hostile our government has become to traditional marriage, and how both Democrats and Republicans are increasingly antagonistic to parental rights, Christian training, and the financial underpinnings of family life.

I assume that “hostile … to traditional marriage” refers to same-sex marriage. I got married 33 years ago, and my state of Washington has legalized same-sex marriage. I’m still waiting for any sign of hostility or belligerence (or even annoyance or crankiness) to my marriage. So far, nothing.

Help me understand this. At a time when Christian traditionalists like Dobson lament the high divorce rate and the acceptability of couples living together and even having children outside marriage, they dismiss a group that is actually embracing marriage.

Same-sex marriage is a celebration of marriage, not an attack. A simple reframing, and a problem turns into an solution. But of course Dobson doesn’t benefit from solutions; he profits only from continued tension.

The hope of the future is prayer and a spiritual renewal that will sweep the nation. It has happened before, and with concerted prayer, could occur again. … If we continue down the road we are now traveling, I fear for us all.

Yeah, an even stronger Christian fundamentalism does sound like a worrisome future since we’ve seen that secular, gay-loving Europe eclipses the U.S. in social metrics.

Yeah, but I need money

Candidly, this ministry continues to struggle financially, and our very survival will depend on the generosity of our constituents in the next two months.

Translated: “Give me some money.”

Please pray with us about the future of this ministry.

Translated: “Give me some money.” (I’ve written before about how prayer requests of this sort admit that prayer is useless.)

I suppose that this kind of lashing out at other people brings in the money. But it’d be nice to see more credible arguments.

August 5, 2013 Frank Turek’s Criminally Bad C.R.I.M.E.S. Argument: Reason
Recent Comments
30 Comments | Leave a Comment
"My small hometown had four Little League teams, each with the nickname of a major ..."
Greg G. Six Christian Principles Used to Give ..."
"If Atlantis supposedly buried deep into the sea...What the hell were the Egyptians going back ..."
Ignorant Amos Movie Review: “God’s Still Not Dead: ..."
"My arm,leg, and beard hair has red mixed in( it's losing the battle to gray ..."
Greg G. Movie Review: “God’s Still Not Dead: ..."
"The story could be derived from such accounts and even the name "Hebrew" derived from ..."
Ignorant Amos Six Christian Principles Used to Give ..."
Browse Our Archives
Follow Us!