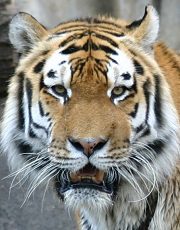 What better way to respond to atheists but to turn one of their own tools against them? That’s the approach philosopher Alvin Plantinga tries to use with his Evolutionary Argument Against Naturalism (EAAN). It’s not a new idea, and both C.S. Lewis and Charles Darwin anticipated it.

In brief, the question is: how can a human mind that’s the result of the clumsy process of evolution be trusted?

About “Darwin’s doubt,” Plantinga argues that only Christians can have confidence that their interpretation of the world is correct. Naturalists can’t prove that minds are reliable until they’ve proven that the source of this claim (the mind!) is worth listening to.

Here’s where Plantinga claims to have turned the tables:

He says that if evolution is true, human beliefs have been selected for survival value, not truth, so why trust them? And yet our beliefs are reliable, suggesting to Plantinga that something besides evolution created them.

Before we get into the specifics of Plantinga’s argument, let’s first establish a baseline. Plantinga and naturalists agree that humans’ needs and desires are pretty logically matched: 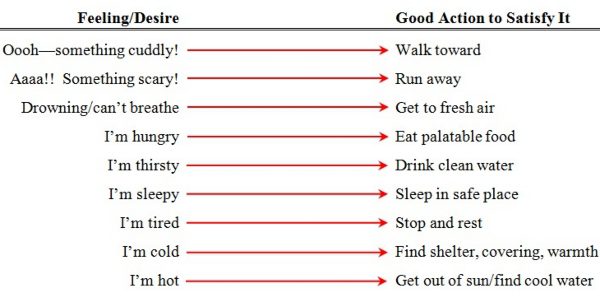 Feelings or desires are on the left, actions are on the right, and the arrow is the belief that a particular action will satisfy that desire.

This is straightforward. A human with the feeling of hunger has the belief that eating food is the action to take. You go toward cuddly things, you run from scary things, you get to clean air if you can’t breathe, and so on. This is the world we all know and understand.

But Plantinga says that naturalists delude themselves. He imagines the naturalist’s world in which these links are jumbled. He imagines a hominid Paul who has some problematic beliefs about predators:

Perhaps [Paul] thinks the tiger is a large, friendly, cuddly pussycat and wants to pet it; but he also believes that the best way to pet it is to run away from it.

So Paul’s instincts toward tigers keep him alive, but only by dumb luck. But unreasonable beliefs don’t stop with tigers. Plantinga imagines the naturalist’s view of the world with beliefs having no connection with reality. That is, he imagines something like this:

Paul’s response to the tiger was just a roll of the dice, and he got lucky. But Plantinga supposes that all of Paul’s beliefs are arbitrary, not just those about tigers. Some actions in this chart are benign, but some are dangerous. When Paul sees something scary, his reaction is to walk toward it. When he’s drowning, he’ll try to sleep. When he’s hungry, he’ll satisfy that need with fresh air, and so on. With his basic desires paired with ineffective methods, this guy is clearly too stupid to live.

This is where natural selection comes in. Natural selection is unforgiving, and belief sets that don’t lead to survival are discarded. Evolution easily explains why Plantinga’s Paul didn’t exist.

An article at Skeptic.com neatly skewers Plantinga’s argument with a familiar example.

If a professional baseball player [incorrectly perceived reality,] that is, if his perception of the movement and location of a baseball was something other than what it actually is, then he would not be able to consistently hit ninety-five mile per hour fastballs.

As an aside, let me admit that I have a hard time maintaining respect for those at the leading edge of philosophy. Do they do work that’s relevant and pushes the frontier of human knowledge? I’d like to think so, but when this is the kind of argument they give, it’s hard to keep the faith.

My advice to philosophers: when you get the urge to play scientist, it’s best to lie down until the feeling goes away.

If we’re made in God’s image,
then why aren’t we invisible, too?
— graffiti

August 21, 2013
Explanation for Objective Morality? Another Fail.
Next Post