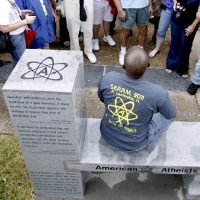 Read part 1 of this series on a new American Atheist monument installed on public property in Florida as a protest against a Ten Commandments monument.

The back of the monument contains quotes by some founding fathers, Thomas Jefferson, John Adams, and Benjamin Franklin.

Benjamin Wiker (the Christian whose article I’ve been critiquing) responds:

The problem with the American Atheists using these quotes is that, while Jefferson, Adams, and Franklin were certainly Americans, they were certainly not atheists.

They warmly approved of the moral doctrines that arose from Christianity. These moral doctrines were understood, by all three, to be essential to forming the character of the citizens for free government.

Moral principles come from people and society. We don’t need to imagine the supernatural to explain them.

“Question with boldness even the existence of a God; because, if there be one, he must more approve of the homage of reason, than that of blind-folded fear.”
— Thomas Jefferson

Wiker tries to handwave a response:

The first quote shows a confidence by Jefferson that the foundation of belief in God is rational, not that reason leads to atheism.

Wrong again. Why would Jefferson demand that we question the existence of God if he meant that belief in God is rational? How stupid does Wiker hope we are?

He has no rebuttal to the Adams quote:

“It will never be pretended that any persons employed in that service [writing the Constitution] had interviews with the gods, or were in any degree under the inspiration of Heaven.”
— John Adams

“When religion is good, I conceive it will support itself; and when it does not support itself, and God does not take care to support it so that its professors are obliged to call for help of the civil power, ’tis a sign, I apprehend, of its being a bad one.”
— Benjamin Franklin

I’d say, “Nice try” except that this is quite a pathetic try. No, that’s not what Franklin is saying. He’s saying that any god so ephemeral that he won’t support his own religion isn’t much of a god.

I guess the church forgot that during the period when the Pope had his own country, ordered Crusades, crowned emperors, and in general meddled in the political affairs of Europe. Or when kings imagined a divine right to rule. Or when Henry VIII took the role of head of the Church of England. The church was up to its well-appointed elbows in politics.

True, “atheism” (whatever that is) didn’t invent separation of church and state, but let’s not pretend that Christianity did, either. Martin Luther’s doctrine of two kingdoms, for example, is hardly the First Amendment.

Not only are we on the same page, we’ve come full circle. The initial news story was of a county in Florida giving exclusive use of their property for a Christian message. Wiker’s support for church/state separation makes clear he would stand alongside American Atheists in demanding either no religious messages or free access for all.

We do not err because truth is difficult to see.
It is visible at a glance.
We err because this is more comfortable.
— Alexander Solzhenitsyn 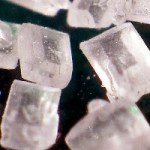 September 13, 2013
Rebutting the “God is Simple” Argument
Next Post