Jesus and Vampires and Werewolves and Time Travel 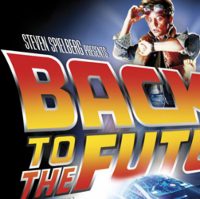 Remember the movie Groundhog Day? Phil Connors (Bill Murray) must relive the same day, over and over. The mechanism is never explored or even brought up—he simply endures the drudgery and pleasures of reliving the same day, hundreds of times, until he gets it right.

The many mechanisms of time travel

That’s time travel of a sort, but it’s a very different kind than we see in Back to the Future. Here, Marty McFly (Michael J. Fox) is accidentally thrust back in time so that he becomes a classmate of his parents-to-be, but he must tread delicately to avoid damaging his own timeline.

The crew of Star Trek IV goes back in time in a captured Klingon warship to retrieve extinct (in their time) humpback whales by going really fast. Superman (in Superman: The Movie) goes back in time to save Lois Lane from dying by spinning the earth backwards. And in the upcoming About Time, a few people can time travel by going into a dark place, clenching their fists, and thinking about when they want to go to. The father, an experienced traveler, assures us that multiple futures and the Butterfly Effect aren’t problems.

It works like this in religion. Religion A says that one god is in charge. Next, religion B says instead that it’s a pantheon of independent gods. And religion C says that it’s a Trinity of gods who are actually one. As with time travel, different fictional domains have their own view of what the magic is and how it works.

Partisans of this or that interpretation of time travel might argue for the logic of one approach and laugh at the idiocy of another, but you’ll probably find more spirited debate among the fans of various fictional creatures—vampires, werewolves, and so on.

For example, are vampires simply nocturnal, with no particular vulnerability to sunlight? Do they die or explode when touched by a single ray of sunlight? The vampires in the television drama True Blood burn on exposure to sunlight and can quickly recover if the exposure isn’t long. The vampires in the novel Twilight avoid sunlight simply because their skin reflects it like diamonds, which would reveal their true identity (why artificial light doesn’t do the same isn’t discussed).

What about garlic and crosses? What about wooden stakes and silver bullets? Do they cast shadows or make reflections in mirrors? Are they hideous or attractive? What are their vulnerabilities, if any? Different fictional worlds have different answers.

There’s no authority. It’s not like you make a claim about the mythological with the fear that real vampires will make themselves available to prove you embarrassingly wrong.

The same is true for religion. It’s is a worldwide Comic-Con. Some people take things very seriously and get dressed in character, while others take a more light-hearted approach. Some people are fans of this TV show or that movie character or some other comic book hero.

Scientology can claim that the galactic tyrant Xenu attempted to solve his overpopulation problem by destroying hundreds of billions of frozen people in volcanoes on earth using hydrogen bombs. Or the LDS church can claim that God the Father was once mortal but attained godhood, and believers can do the same.

There’s no authority to reject these stories. No authority, that is, except common sense and our well-established understanding of how things actually work. Christians can say to the Scientologists or Mormons, “Hold on—you’re breaking the rules,” but then they break the spell and acknowledge that they are doing the same. They can’t awaken someone from their dream without being awake themselves.

You can ignore reality,
but you cannot ignore the consequences of ignoring reality.
— Ayn Rand