Dating Advice: the FIRST Thing to Figure Out in a Relationship

Dating Advice: the FIRST Thing to Figure Out in a Relationship November 11, 2013 Bob Seidensticker 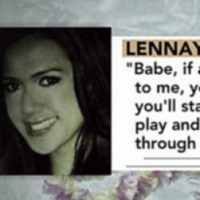 About a year ago, we heard the sad story of star Notre Dame football player Manti Teʻo. His girlfriend died after a battle with leukemia. Instead of responding with withdrawal, however, he led his team to an upset victory shortly afterwards. The inspirational story was national sports news.

But as the story evolved, we gradually discovered that the girlfriend didn’t actually die of leukemia. In fact, she didn’t die at all. She didn’t even exist. She was a hoax.

The story is remarkable because this kind of deception is so rare.

Christians often say that our relationship with God is like a relationship with another person. Like our relationship to God, marriage, for example, is built on faith. You can’t be certain that your marriage will last. You don’t know that a better partner isn’t just around the corner. But you evaluate the evidence and take a leap of faith.

This completely misses the mark. The relationship between two romantic partners isn’t at all like that between you and God because you know that the romantic partner exists. The unfortunate experience of Manti Teʻo underscores this point. That was the glaring, embarrassing, almost unbelievable error that he made: not being sure that the other party even existed. This is the error that Christians make and, here too, it’s glaring, embarrassing, and almost unbelievable.

The Christian might respond that, sure, the girlfriend/wife analogy isn’t perfect. Heck, what analogy is? But it’s still useful.

Uh, no. This analogy is completely, totally wrong. The question of existence shouldn’t even come up in a personal relationship, and yet with God, it’s the primary question. This analogy is useful only to tamp down questions, and it should be discarded by any honest Christian.

One of the more ridiculous responses I’ve gotten to this problem is that for God to make his existence obvious and eliminate the need for faith would be an imposition. He would force belief on me, whether I wanted it or not.

But I’m forced to accept the existence of new people and new things all the time. That’s life. No one considers that an imposition.

What makes a good friend?

I believe it was physicist and priest John Polkinghorn who also tried to salvage the analogy. He argued that continually testing a friendship or setting traps to verify that someone is truly a friend is no basis for a friendship. A good friendship needs trust.

Yes, it’s bad form to frequently say, “How about now? Am I still your friend now?” But here again this misses the point. You know your friend exists, while that’s the fundamental issue in the God “relationship.”

There is as much evidence for an historical Jesus as there is for the existence of a great many other historical figures whose existence is never seriously doubted. … What we know about Alexander the Great could fit on a few sheets of paper, yet no one doubts that Alexander existed.

Evidence for Alexander? You mean like coins with his name and likeness? Statues of a man with the inscription “Ἀλέξανδρος”? Twenty new cities named Alexandria, all dating from about the same time and consistent with his travels? Perhaps there are even reports of his exploits from hostile sources. No, no one doubts the existence of Alexander, but that’s because have a very different kind of evidence with Alexander than with Jesus.

Church father Augustine said, “Seek not to understand so you may believe, but believe so you may understand.”

I guess you could just walk the walk and try to build up a belief, but why? I could work really hard to convince myself that unicorns or fairies exist, but why would I do that? Any Christian faith that’s built up this way—just believe for no good reason until you believe by habit—is built on nothing. I’d rather build my beliefs on evidence.

Many analogies have been tossed out to rationalize God’s existence. God’s relationship to us is like king to subject, judge to defendant, parent to child, or, as in the case of Manti Teʻo, boyfriend to girlfriend.

I refuse to prove that I exist,
for proof denies faith,
and without faith I am nothing.
— God (as quoted by Douglas Adams)

November 8, 2013
It’s Funny Until Someone Gets Hurt, then it’s Hilarious
Next Post