It’s Funny Until Someone Gets Hurt, then it’s Hilarious

It’s Funny Until Someone Gets Hurt, then it’s Hilarious November 8, 2013 Bob Seidensticker 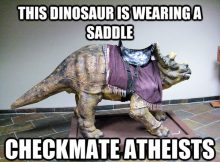 I’ve been amazed at the popularity of Creationism/Intelligent Design among Christian pundits.

Dr. Karl Giberson pointed out an interesting downside of this mindless rejection of science. He begins by citing a Barna survey that lists six reasons why most evangelical Christians disconnect from the church, at least temporarily, after age 15. The most interesting reason: “Churches come across as antagonistic to science.”

Of the young adults surveyed,

As an example of this rejection of science, Giberson points to the technique recommended to schoolchildren by Creation Museum founder Ken Ham. Ham encourages students to ask, “Were you there?” when the biology teacher says that life on earth appeared roughly 4 billion years ago or the physics teacher says that the Big Bang gave us the universe in its present form 13.7 billion years ago.

Ham proudly blogged about nine-year-old Emma B., who wrote to tell Ham how she attacked a curator’s statement that a moon rock was 3.75 billion years old with “Were you there?”

Biologist PZ Myers nicely deflated Ham’s anti-science question with a gentle reply to Emma B. Myers recommends using instead “How do you know that?” which is a question from which you can actually learn something.

Contrast that with Ham’s “Were you there?” which is designed simply to shut down discussion and to which you already know the answer.

“Were you there?” is a subset of the more general question, “Did you experience this with your own senses?” To Science, this question lost significance hundreds of years ago. The days when Isaac Newton used taste as a tool to understand new chemicals are long gone. Modern science relies heavily on instruments to reliably provide information about nature—from simple ones like compasses, voltmeters, and pH meters to complex ones like the Mars rovers, Hubble space telescope, and Large Hadron Collider.

Personal observation is often necessary (finding new animal species, for example), but this is no longer a requirement for obtaining credible scientific evidence.

From the standpoint of mainstream Christianity, Ham’s position as a young-earth Creationist and Bible literalist is a bit extreme, but higher profile figures like William Lane Craig also grant themselves the privilege of picking and choosing their science. Craig uses science a lot—at least, when it suits his purposes. The Big Bang suggests a beginning for the universe, so he takes that. Evolution suggests that life on earth didn’t need God, so he rejects that bit.

He imagines that he’s Hanes Inspector Number 12: “It’s not science until I say it’s science.” It may be fun to pretend that, but what could possibly make you think that’s justifiable?

That reminds me of a joke

Scientists figure out how to duplicate abiogenesis (the process by which molecules became something that could evolve). They are so excited that they email God to say they want to show him. So God clears some time on his calendar and has them in.

“Sounds like you’ve been busy,” God said. “Show me what you’ve got.”

“Okay—first you take some dirt,” said one of the scientists.

And to William Lane Craig’s pontificating about science, I say, “Hold on—get your own science.”

As a layman, you either play by the rules of science and accept the scientific consensus whether it’s compatible with your preconceptions or not, or you sit at the children’s table. If you want to hang out with the adults, you can’t invent reasons to rationalize why this science is valid and that is not.

Evangelicals may want to rethink this picking and choosing of science. Giberson ends his article:

The dismissive and even hostile approach to science taken by evangelical leaders like Ken Ham accounts for the Barna finding above. In the name of protecting Christianity from a secularism perceived as corrosive to the faith, the creationists are unwittingly driving the best and brightest evangelicals out of the church. … What remains after their exodus is an even more intellectually impoverished parallel culture, with even fewer resources to think about complex issues.

Perhaps I should be more welcoming to Christian anti-science in the future.

No man ever believes that the Bible means what it says;
he is always convinced that it says what he means.
— George Bernard Shaw

(This is a modified version of a post originally published 2/22/12.)

November 6, 2013
A Convincing Holy Book? Not Possible.
Next Post

November 11, 2013 Dating Advice: the FIRST Thing to Figure Out in a Relationship
Recent Comments
72 Comments | Leave a Comment
"A bit off-topic, but at least Gospel-adjacent. You might recall that in June, Team Hobby ..."
Lex Lata The Bible defeats its own Resurrection ..."
"Lizards? You have been taken in, this is just a cover for the squirrels and ..."
epeeist Saving Haeckel: why “ontogeny recapitulates phylogeny” ..."
"https://www.henrymakow.com/..."
outsider Is God the good guy or ..."
"I think his argument is that Matthew is not an eyewitness. Matthew reports that there ..."
Greg G. The Bible defeats its own Resurrection ..."
Browse Our Archives
get the latest updates from
Cross Examined
and the Patheos
Nonreligious
Channel
POPULAR AT PATHEOS Nonreligious
1