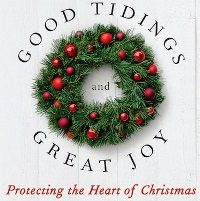 No, I’m not part of the target audience for Sarah Palin’s new book, but I was given a copy to review. Good Tidings and Great Joy: Protecting the Heart of Christmas is a fairly predictable mix of the joys of the traditional American Christmas, an attack on those angry atheists who are apparently determined to make Christianity illegal (starting with Christmas), and a review of the standard conservative touch points.

Let’s take a look at the good, the bad, and the ugly in this book. First, the good. Despite Palin’s eagerness to play the beleaguered Christian, I was not surprised to find important areas where we agree. It’s a War-on-Christmas miracle!

Most chapters begin with long reflections of Palin’s childhood and adult family life. She includes personal photos and emphasizes the importance of family Christmas traditions by talking about her own. She shares stories of personal difficulties and Christmas memories—a health scare with her father, her daughter Brisol’s revelation that she was pregnant, helping to feed homeless people, difficulties during and after her Vice Presidential bid, and so on. Some favorite Christmas recipes are added in an appendix.

Stories about growing up in Alaska were nice—there’s a lot different from my own upbringing in Virginia—but I did experience a bit of whiplash. She goes on at length about the traditional Norman Rockwell Christmas traditions—sipping hot chocolate by the fire, the unwritten rules about opening presents, and so on. That sounds like what I value about Christmas as well. But then she discards all this like used wrapping paper to emphasize the real reason for the season.

Our annual family activities I’ve described are mere traditions …. But they’d be nothing if separated from the historical event that animates the Christmas season. (8)

It’s about Christ and our ability to worship him freely. It’s about America, and what liberty truly means in our day-to-day lives. (10)

I also value America, liberty, and religious freedom. You can’t worship who you want? Then I’m as outraged as you are. Here we see a bit of the War on Christmas theme, but more on that later.

Living with a secular constitution

After listing many recent examples of church/state friction—protests against nativity scenes in front of city hall, for example—she gives a brief list of rules for how we can all get along. She recommends avoiding a Christian-only display.

The courts tend not to like Nativity scenes isolated from other holiday imagery. (53)

The “other holiday imagery” seems to be Santa Claus and snowmen rather than a clear public pronouncement that all faiths are welcome, as courts have demanded. Still, it’s a start.

But what if I’m offended?

She makes a point with which I strongly agree:

Traditionally, … Americans don’t have a right to not be offended (23)

That sentiment is common among American atheists. In fact, I bet that it’s predominant. Citizens have many important rights, but not being offended isn’t one of them.

Are atheists allergic to Christmas?

Want to see a photo of Richard Dawkins with his Christmas tree? Check out the Atheists for Christmas web site. Dawkins is at least one prominent atheist who finds secular value in a holiday that is currently the most popular in a long line of winter holidays.

Western culture is built on sometimes-forgotten references to gods. Christmas 2013 will be on a Wednesday, but the name Wednesday also honors a god. “Wednesday” means “Woden’s Day,” and Woden is the English form of Odin, the Norse supreme god. In Romance languages, that day is typically “Mercury’s Day” (mercredi in French and miércoles in Spanish, for example).

The same supernatural connection applies to the year 2013, which counts as its year one an approximation of the birth year of Jesus.

Sure, Christmas was deliberately placed on the calendar to usurp other winter holidays such as Yule, Saturnalia, Brumalia, and any other solstice celebration. And Americans celebrate other December holidays such as Kwanzaa, Pancha Ganapati, and Hanukkah. But if atheists have no problem with Wednesday (which acknowledges Odin) and 2013 (which acknowledges Jesus), why not Christmas?

Palin’s “Good Tidings and Great Joy” isn’t all good. Continue with the Bad.

Do not learn the ways of the nations. …
For the customs of the peoples are worthless;
they cut a tree out of the forest,
and a craftsman shapes it with his chisel.
They adorn it with silver and gold. …
Like a scarecrow in a melon patch, their idols cannot speak. …
Do not fear them; they can do no harm nor can they do any good.
— Jeremiah 10:2–5

December 14, 2013
Jesus and Santa: a Parable on How We Dismiss Evidence
Next Post