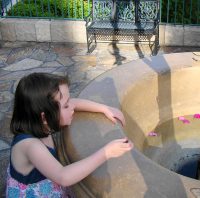 Have you heard the song “Christmas Shoes” from about ten years ago? Patton Oswalt tore it up in a clever comedy bit (video 7:49, rated R for language), and he makes an excellent point about the illogic of what Christians tell themselves.

The song tells the story of a guy who’s in yet another long line before Christmas, not really in the Christmas spirit. Ahead of him in line is a grubby kid holding a pair of shoes. When it’s the kid’s turn, he tells the clerk his story, that he’s buying his mother shoes to make her feel better. She’s sick, and he wants her to look her best if she meets Jesus that night.

The kid counts out the price in pennies, and it turns out that he doesn’t have enough. So he turns to our hero who feels sorry for the kid and pays for the shoes. The story concludes:

I knew I’d caught a glimpse of heaven’s love
As he thanked me and ran out
I knew that God had sent that little boy
To remind me just what Christmas is all about.

It’s a sweet story, and lots of people filter life’s events through a Christian lens in this way to see God’s benevolent purpose behind things. But let’s analyze this to see how “heaven’s love” worked in this situation.

What the story really says

God sees the cranky guy in line. He gives the kid’s mom some hideous disease, puts the kid in line in front of Mr. Cranky, and makes the kid a little short on cash so that this Christmas miracle could happen. In other words, God needs to make someone die and leave a kid motherless to spread a little Christmas spirit.

Is that the best explanation for the evidence? Is that an explanation that a Christian would want? What kind of insane deity would do that? Perhaps good and bad things just happen, without divine cause, and we can use events in our lives to prod us to consider what’s important. We don’t need God and we don’t need to be a Christian to be delighted by life, find silver linings, and use everyday events to remind us of things to be thankful for.

Reinterpreting events through a Christian lens can be comforting, and it patches holes in the Good Ship Christianity where reason leaks in. But this is simply a rationalization to support a presupposition, not an honest following of the evidence, and when you stop to think of what you’re actually saying, you’ll see that the reality you’ve invented not only makes no sense but is actually repulsive.

When Christians wonder why atheists get agitated, this kind of empty childish thinking is often the cause.

A coin in a wishing well

Consider another story. Suppose a girl sick with cancer throws a coin into a wishing well and asks to get better. The net effect is that the girl is a little happier, like she took a happiness pill.

But this wishing well belief is just an ancient custom. We all know that wishing wells don’t really do anything. Should you break the news to her?

Few of us would. What’s the point? She actually does feel better, and she’ll have plenty of time to deal with reality as an adult. She has guardians in her life who will protect her as necessary, shielding her so that she can hold this false but helpful belief.

But for someone to become an adult, that person must grow up. We leave behind wishing wells, Santa Claus, fairies, and other false beliefs as we become independent. No longer are the necessities of life given to us; as adults, we must fend for ourselves—indeed, we want to fend for ourselves. The parent who sugarcoats reality or keeps the child dependent for too long is doing that child no favors.

Reality is better than delusion, happy though that delusion may be. Hearing the doctor say, “You’ll be just fine” feels a lot better than “You have cancer,” but if I really have cancer, which one allows me to take steps to improve my future?

Religion infantilizes adults and keeps them dependent. That’s a good thing for the 100-billion-dollar-a-year U.S. religion industry, but what is best for the individual—a pat on the head or reality?

(This is a modified version of a post originally published 1/13/12.)

December 23, 2013 A Defense of Premarital Sex
Recent Comments
339 Comments | Leave a Comment
Browse Our Archives
get the latest updates from
Cross Examined
and the Patheos
Nonreligious
Channel
POPULAR AT PATHEOS Nonreligious
1