Jesus and Santa: a Parable on How We Dismiss Evidence

Jesus and Santa: a Parable on How We Dismiss Evidence December 14, 2013 Bob Seidensticker 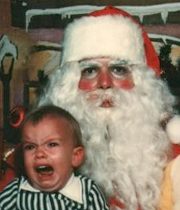 Harriett Hall (the SkepDoc) wrote a clever story about two kids trying to figure out whether the tooth fairy really exists or not. Inspired by that, and in keeping with the season, I’d like to imagine two kids arguing about Santa.

It was early December, and little Jerry had begun to doubt the existence of Santa Claus. He made his case to his younger brother Scott.

“Okay, why are there all those Santas on the street corners ringing for money? How can Santa be at all those stores at once?”

“They’re not the real Santa, just his helpers,” Scott said. “And maybe they’re just testing us to see if we’ll still believe. I’m going to believe, because if you don’t, you don’t get presents.”

“But I recognized one of them—it was the father of one of my friends.”

“Then those are just ordinary people imitating Santa, raising money for a good cause. Anyway, I’ve seen Santa on TV at Thanksgiving—everyone has.”

Jerry sees that he’s not making any progress, so he gives up. On Christmas afternoon, he’s alone with Scott and tries again. “Remember that video game that you told Mom about and then you forgot to tell Santa?” Jerry said. “But you got it anyway. Mom must’ve bought it and written on the package that it came from Santa.”

“Then tell me this: how can Santa get around the world in one night?”

“My friends all say that Santa is real. Anyway, Santa has magic. And the cookies we leave out for Santa are always gone on Christmas morning.”

“With the Junior Detective kit that I got this morning, I dusted the cookie plate for fingerprints, and they were Mom’s.”

“So what? Mom set out the plate, and Santa wears gloves.”

Jerry gives up for the year. On Christmas afternoon the next year, he tries again. “Lots of the older kids don’t believe in Santa. They say that their presents only come from their parents.”

“Sure,” Scott said. “Santa only gives presents to those who still believe in him.”

“A few months ago, I was snooping in Dad’s sock drawer, and I found every letter we ever wrote to Santa.”

“Why not? Santa didn’t need them anymore and each year just gives them to Mom and Dad for keepsakes.”

“The only fingerprints on our presents were Mom’s or Dad’s.”

“Mom and Dad always get up early on Christmas. They could’ve rearranged them.”

“Last week, I found all our presents hidden in a corner in the attic.” Jerry pawed through some of the torn wrapping paper. “I wrote my initials on the bottom of each package. And look—here they are. That proves that Santa didn’t bring them here last night.”

“I asked Mom, and she said that Santa is real. Anyway, how do I know you didn’t write your initials on the wrapping paper this morning?”

Do adults make the same mistakes?

Like little Scott, if you’re determined to believe something, you can rationalize away any unwelcome evidence. (By rationalize, I mean taking an idea as fact and then selecting or interpreting all relevant evidence to make it support that immutable given.)

Christians rationalize, too. They rationalize away contradictions in the Bible, the oddity of a hidden God, or why so much bad happens to the people God loves. They can find a dozen reasons why a particular prayer wasn’t answered, even though the Bible promises, “Ask and ye shall receive.” But the Christian will say that they’re simply defending the truth—they’re not rationalizing; they’re right.

In five minutes we can see flaws in others that we don’t see in ourselves in a lifetime. Perhaps this episode with Jerry and Scott will encourage us to see our own rationalizations.

With a little work, even the nuttiest theory can be given a scholarly sheen. There’s a web site titled, Galileo Was Wrong; The Church Was Right. That’s right, it argues for geocentrism, an earth-centered universe. If scholars can argue that the sun goes around the earth, imagine what a few thousand years of scholarly work can do to a religion. Any Christian can point to centuries of scholarship to give a patina of credibility to their position—but, of course, so can Muslims, Hindus, and those in many other religions.

I can’t prove Santa doesn’t exist. Nor can I disprove leprechauns, Russell’s Flying Teapot, the Flying Spaghetti Monster, or God. The thoughtful person goes where the evidence points rather than accepting only the evidence that supports his preconception.

(This is a modified post that was originally published 12/9/11.)

December 13, 2013
Virgin Birth of Jesus: Fact or Fiction?
Next Post