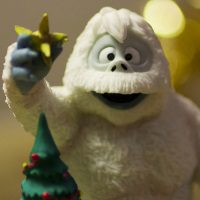 Let’s conclude our look at the good, the bad, and the ugly in Sarah Palin’s book about the War on Christmas, Good Tidings and Great Joy: Protecting the Heart of Christmas (read part 1 here).

In a book by a Tea Party figurehead, you’ve got to expect a nod to conservative values, and Palin nods like a bobblehead. We hear about Nancy Pelosi’s outrageous budget and the “Lamestream media,” how guns are great, how abortion and the ACLU are terrible, that “under God” must stay in the Pledge, how the secular Left has little but a failed welfare state as its legacy, that Obamacare sucks, and isn’t it great that Chick-fil-A said what had to be said about same-sex marriage?

The heartbreak of “Happy Holidays”

After a long discussion of the anguish this causes Christians, she declares victory by quoting a Wal-Mart spokesperson:

Whew! That takes care of one the items on my Top Ten list (and I’m delighted to see that this problem has been resolved for years). If we could get World Peace figured out, that would be the icing on the cake.

I’ll conclude this over-long review with a partial list of errors in Palin’s book. There are too many to discuss in detail, but they are too important to let pass without a quick response. These mindless talking points can rally the troops but only if those troops have no interest in thinking through the issues.

Palin’s book is much ado about nothing. She’s determined to feel offended and see injuries to Christianity everywhere she looks. Unfortunately, she misses an opportunity to use her credibility within the conservative community to point out that Christian-only displays on state-supported property are both unfair and illegal.

Palin has embraced what I’m still having a hard time with: “Can’t we all just get along?” doesn’t sell.

Every atom in your body came from a star that exploded.
And, the atoms in your left hand probably came
from a different star than your right hand.
It really is the most poetic thing I know about physics:
You are all stardust.
So, forget Jesus.
The stars died so that you could be here today.
— Lawrence M. Krauss

December 20, 2013 How Christianity Infantilizes Adults
Recent Comments
116 Comments | Leave a Comment
Browse Our Archives
get the latest updates from
Cross Examined
and the Patheos
Nonreligious
Channel
POPULAR AT PATHEOS Nonreligious
1