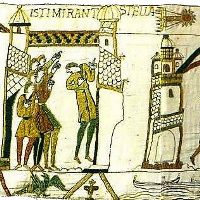 We’re looking at pastor John Hagee’s breathless new book, Four Blood Moons. For the beginning and a summary of the three instances of “blood moons” that Hagee claims have already happened, see Part 1.

What does Hagee see in our future?

The event ahead of us is the focus of Hagee’s book. This will be the four blood moons beginning with Passover 2014 (April 14) and ending with Sukkot 2015 (September 28).

Now that we have Hagee’s argument, let’s see if his frantic warning is worthy of concern.

Hagee’s claim that “a world-shaking event that will happen between April 2014 and October 2015” is a pretty safe bet. The same is true for his ominously nonspecific subtitle, “Something is about to change.” Find any 18-month period in the last century where you couldn’t cobble together some argument for a “world-shaking event” somewhere. The time period is too wide and the claimed event too imprecise for this to be an interesting prophecy. It’s amazing that the omniscient and omnipotent creator of the universe who’s “literally screaming at the world” can’t be more specific.

Maybe instead of his prophet hat, Hagee grabbed a dunce cap.

Given enough vague predictions of unspecified terrible things, eventually something will stick. Another Chernobyl or Fukushima disaster? Another Banda Ache or Haiti earthquake? Another 9/11 attack or influenza pandemic or world war? Sure, those are possible. But applying Christian mysticism obviously doesn’t help show the future if Hagee’s argument is an example.

Wouldn’t the eclipses need to be visible in the Promised Land? The four coming up beginning in 2014 won’t be (though there may be a glimpse of the last one). The same was true for previous instances—few of the “blood moons” were visible in Israel.

What good is a blood moon if God’s chosen can’t see it?

Did anyone notice these celestial fireworks in the past? God was screaming, after all. Did anyone in Israel notice that it was spooky to have had blood moons in other parts of the world (though not Israel) after the Six-Day War was already over? Did they conclude that God was speaking?

If these blood moon events happened without notice, God’s screaming is pretty feeble.

I challenge Hagee to go back further in time. I’ll bet it’s even harder to find any Jewish significance to the dates of previous instances of four blood moons.

What could God possibly be saying with this? What could the message be to the Jews exiled from Spain? “Something bad already happened”? Yeah, I bet that was helpful. How could you possibly get any useful information from such a nonspecific and tardy message? And how does the independence of Israel fit in, since this is clearly a good thing?

Apparently, blood moons mean, “Something bad will happen! Or is happening! Or maybe it’s something good. Or maybe it’s already happened. Or something.”

Tell God I said thanks.

Hagee delights in taking a pre-scientific view of nature, like the Normans who interpreted Halley’s comet to presage the death of English King Harold and the success of William of Normandy (see the relevant bit of the Bayeux tapestry, above). How is Hagee’s thinking useful? How can anyone in the twenty-first century take it seriously?

The world will end!

In Hagee’s brief video introduction, he has yet more nutty stuff to say. He quotes Mark 13:24–6 as somehow relevant to what we’re going to see during the upcoming four blood moons phase:

But in those days, “the sun will be darkened, and the moon will not give its light.” At that time people will see the Son of Man coming in clouds with great power and glory.

He wants to say that the world will end and Jesus will return, but not in any measurable way—y’know, just in case. He tap dances away from any accountability by omitting an important part. Actually, the quoted bit in Mark goes like this:

“the sun will be darkened, and the moon will not give its light; the stars will fall from the sky, and the heavenly bodies will be shaken.“

Stars falling from the sky? That’s something you wouldn’t miss. I can see why Hagee would delete mention of anything specific that will hang around to embarrass him in 2015.

Hagee finds another verse relevant. Luke 21:28 says, “your redemption draws near.” Of course, four verses later, Jesus says, “This generation will certainly not pass away until all these things have happened.” Oops—that didn’t happen! At least Hagee will be in good company if his own prophecy fails.

Hagee also says, “the sun and the moon will eclipse at the same time.” This isn’t possible in our reality, and Hagee doesn’t say how this is supposed to happen (no, I’m not going to buy the book to try and find out).

Eager followers can be pretty lenient, and many Christians seem determined to avoid learning from past failures.

Other failed prophets have been able to bounce back, from Christians like Harold Camping and Hal Lindsay, to psychics Jeanne Dixon, Edgar Cayce, and Sylvia Browne. Browne was way off even in her prediction about her own age at death.

I wrote my first novel about the Azusa Street Revival in 1906 in Los Angeles. This was in the early years of the Pentecostal movement. A nutty church was creating waves, and a reporter went to check it out. Someone in the church predicted terrible destruction, and that story appeared on the front page of the LA Times on the very day of the Great San Francisco earthquake and fire.

Given enough tries, a few random predictions will stick.

Wait—I’m feeling a prediction coming on myself … it’s getting clearer … ah! I predict that John Hagee’s prediction will fail in 2015 and the end will not come. He will then pick himself up and carry on as if he’s not completely humiliated himself. And his flock will keep comin’ back for more.

There is nothing more telling
of a person’s fundamental lack of perspective and humility
than an insistence that if they cannot reconcile their beliefs with reality,
then reality itself must be wrong.
— Anonymous

December 9, 2013 A Dozen Responses to the Transcendental Argument for God (3 of 3)
Recent Comments
39 Comments | Leave a Comment
"Helpful, thanks. I've informed my cyborg overlords."
Bob Seidensticker How to Say, “I Told You ..."
"Gary, Another expectation I had was that you would continue to claim you had debunked ..."
Alan Mill Soft Theism: Where Does Morality Come ..."
"Scooter, you didn’t actually answer the question, which I didn’t phrase properly in this instance. ..."
Alan Mill Final Thoughts from the Soft Theist
"This is what I see, too. No comment, just the above."
MR How to Say, “I Told You ..."
Browse Our Archives
get the latest from
Cross Examined
Sign up for our newsletter
POPULAR AT PATHEOS Nonreligious
1