Does the Old Testament Condemn Homosexuality? (2 of 2)

Does the Old Testament Condemn Homosexuality? (2 of 2) January 29, 2014 Bob Seidensticker 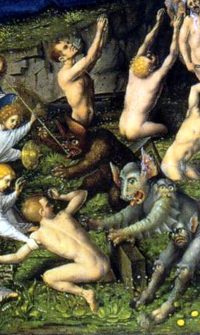 Last time we looked at the Sodom and Gomorrah story. Let’s move on to the book of Leviticus.

Mary Douglas clarifies the confusing purity laws in Leviticus, where things are clean or unclean seemingly arbitrarily. She argues that “clean” things are proper members of their category. A proper fish has fins and scales, so that makes it an abomination to eat improper sea animals like clams and shrimp. A proper land animal—one that is part of civilized society—is cloven hoofed and cud chewing like a cow or goat. To be clean, any animal or wild game must share these characteristics—hence no rabbits (not cloven hoofed) or pigs (not cud chewers). “Unclean” means “imperfect members of its class.”

Homosexuality fits easily into this taxonomy—proper sex is man with woman, so man/man or man/animal sex is explicitly forbidden. But it’s ritually forbidden, not forbidden because of any innate harm.

First, note that this again is nothing more than ritual abomination.

Second, note the punishment. Don’t point to the Bible to identify the crime but then ignore its penalty. There is no crime if there is no penalty. Do modern Christians truly think that the appropriate response to male homosexuality is death?

Third, note what else this chapter demands: unclean animals can’t be eaten (20:25), exile for a couple that has sex during the woman’s period (:18), death to spiritual mediums (:27), death for adultery (:10), and death for anyone who curses his father or mother (:9). It comes as a package of out-of-date tribal customs—with what justification can a Christian select the anti-homosexual verse and ignore the rest?

God said, “I will establish my covenant as an everlasting covenant between me and you and your descendants after you for the generations to come, to be your God and the God of your descendants after you” (Gen. 17:7). Verses like this would saddle Christians with all the Old Testament customs, from the sacrifices to the crazy stuff like genocide that they’d like to distance themselves from, and they’ll say that these verses apply to Jews only. Fair enough—then stop cherry picking Old Testament passages from sections of the Old Testament that don’t apply to you.

This selective reading reminds me of Rev. O’Neal Dozier, an honorary co-chair of Rick Santorum’s election committee, who said that homosexuality is the “paramount of sins” and that it is “something so nasty and disgusting that it makes God want to vomit.” My first impulse to this energetic condemnation is to wonder if Haggard’s Law applies, but more to the point, why is homosexuality at the top of the list? Why should it be any worse than any other “abomination” such as eating shrimp, telling a fortune, or a woman wearing pants? (Unless, of course, Rev. Dozier is simply using the Bible as a sock puppet to have it speak his opinions, which is certainly where the evidence points.)

Apologists like Dozier who say that the Bible is clear in its rejection of homosexuality won’t say the same thing about the Bible’s support for genocide, slavery, and polygamy. They’ll say, “Okay, slow down and let me tell you why the surface reading isn’t correct.” The predicament for today’s Christian is the clash between modern morality and the warlike culture of the early Israelites.

A common response to God’s embarrassing actions in the Old Testament is to say that he is mysterious and inscrutable to our simple human minds. But then these same Christians will contradict themselves and say with certainty that God is against homosexuality, abortion, and taxes.

Apologists who pick and choose which commandments must be taken literally are beating the copper of the Bible against the anvil of their faith. Shouldn’t it be the other way around? Why is the atheist the one letting the Bible speak for itself?

Or if the Bible is simply the sock puppet used to give an argument credibility, I’d appreciate Christians dropping the middleman, admitting that their beliefs come from their innate moral sense, and defending them as such.

January 27, 2014
Does the Old Testament Condemn Homosexuality?
Next Post

January 31, 2014 Why is the Universe Comprehensible?
Recent Comments
105 Comments | Leave a Comment
"Actually x is shorthand for Christ. The Greek letter x (pronounced chi) is the first ..."
Michael Neville The Most Powerful Argument Against Christianity ..."
"...."You mean the video that has been proved to contain doctored interviews by a comedian ..."
RoadLessTravelled Ray Comfort’s “The Atheist Delusion”: 64 ..."
"But actual absolutes may undercut effectiveness with those on the edge of disbelief, the only ..."
Phil Rimmer Defending 10 Atheist Arguments
"The Needless God Hypothesis. Let me count the ways....orImprobable God. Let me count the ways."
Phil Rimmer Defending 10 Atheist Arguments
Browse Our Archives
get the latest from
Cross Examined
Sign up for our newsletter
POPULAR AT PATHEOS Nonreligious
1