A few months ago, I attended a lecture by Stephen Meyer of the Discovery Institute about his new book, Darwin’s Doubt: The Explosive Origin of Animal Life and the Case for Intelligent Design.

He explains “Darwin’s doubt” in the Amazon summary:

When Charles Darwin finished The Origin of Species, he thought that he had explained every clue, but one. Though his theory could explain many facts, Darwin knew that there was a significant event in the history of life that his theory did not explain. During this event, the “Cambrian explosion,” many animals suddenly appeared in the fossil record without apparent ancestors in earlier layers of rock.

The Cambrian explosion was the appearance of all but one of the 35 present animal phyla (body plans) in the first 20 million years of the Cambrian period.

What did Darwin say?

In On the Origin of Species, Darwin wrote:

If [evolution is] true, it is indisputable that before the lowest Cambrian stratum was deposited long periods elapsed, as long as, or probably far longer than, the whole interval from the Cambrian age to the present day; and that during these vast periods the world swarmed with living creatures. Here we encounter a formidable objection; for it seems doubtful whether the earth, in a fit state for the habitation of living creatures, has lasted long enough.

Darwin then notes that the best evidence available to him gives evolution 100–200 million years since the consolidation of the earth’s crust. In fact, today’s estimate is 4 billion years.

Would Darwin have still found a “formidable objection” if he had known that the earth was actually 20 to 40 times older than he thought? Perhaps Meyer is fairer in his book, but in the lecture, he did nothing to clarify the incorrect data that underlay Darwin’s conclusions.

More to the point, no biologist cares what Darwin thought.

Contrast Darwin with Aristotle. Europe even through the Renaissance compared new developments with Aristotle to see if the great philosopher would have agreed. From 2000 years in the past, Aristotle could frown on revolutionary new ideas. Bertrand Russell said, “almost every serious intellectual advance has had to begin with an attack on some Aristotelian doctrine.”

But no biologist today cares if Darwin would approve of a new idea or not. Darwin did remarkable things for his time, but Darwin is relevant in the field History of Science, not Biology. Evolution deniers like Meyer point out where Darwin was wrong, but this is useful only in mesmerizing the public.

Is the Cambrian explosion that remarkable?

The Cambrian explosion might have been the result of a perfect storm of factors that opened the field to new innovative body plans: predators accelerated the evolution of hard body parts, a global ice age had just ended, the Hox genes that control body plans may have developed at this time, and atmospheric oxygen may have been rising. We might also have underestimated the progress in the Precambrian because those animals were tiny or soft and didn’t leave much of a fossil record.

Let’s also be clear how limited the Cambrian explosion was. It’s a quick expansion in the body plans of animals. That’s it. While it happened quickly, it still took 20 million years, and there was little filling out of these phyla with individual species. There were no land animals, and our ancestors in the phylum Chordata would’ve been no more than primitive eel-like fish at this time (see drawing above). Evolution would slowly push this phylum to produce bony fish (420 million years ago), amphibians (370 mya), reptiles (310 mya), dinosaurs (230 mya), mammals (225 mya), and birds (160 mya).

Getting back to basics, the remarkable development of the eukaryotic cell (the kind that animals and plants have) from the more primitive prokaryotes such as bacteria happened 2700 mya.

In short, the Cambrian is impressive when we zoom in to just the major divisions in one kingdom, but it ignores most of evolution.

The Cambrian explosion looks at one feature in the vast expanse of evolution. Another that is at least as remarkable is the Great Ordovician Biodiversity Event. If the Cambrian created the display cases for the phyla, the GOBE filled them with species.

The Ordovician period followed the Cambrian, and it created far more genera (“genuses”) than its predecessor, as the graph below shows. 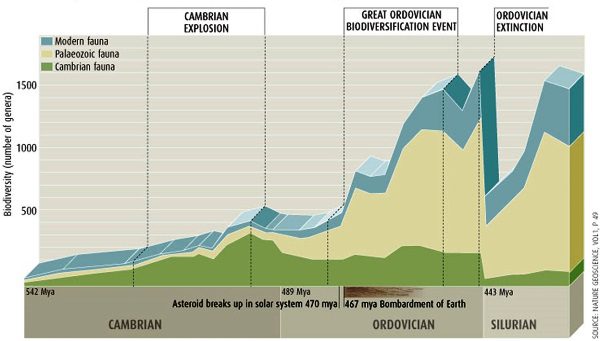 (The three kinds of fauna listed above aren’t important for this discussion.)

From the perspective of biodiversity, the Cambrian doesn’t look so innovative after all. The article that accompanies the graph states,

This boom was like nothing the world has seen since. The Ordovician is the only time in the history of animal life that huge numbers of new species appeared without a mass extinction to clear the decks beforehand.

Why does Meyer focus on the Cambrian?

Meyer must weave a simple story: evolution expects gradual change, but the Cambrian shows that change was sometimes explosive. Evolution can’t explain this, but Intelligent Design can. And they all lived happily ever after.

But reality looks a lot more complicated than “And God said, ‘let there be many animal phyla,’ and it was so.” The Cambrian explosion is just one part of a big picture. It is separate from the very different explosive growth in the GOBE and the gradual evolution of plants and chordates.

Note also that Intelligent Design advocates didn’t uncover the Cambrian explosion. Biologists did. And it hasn’t convinced them that evolution is wrong. How could it convince me?

See nature through the eyes of science, the only way we ever have learned about it.

Religion is like aspirin.
It’s okay to take a little to make yourself feel better,
but you shouldn’t take too much,
and you shouldn’t force people to take it who don’t want any.
— Daniel Handler (Lemony Snicket)

January 15, 2014 Christians: Why You Need an Atheist Speaker at Your Next Conference
Recent Comments
205 Comments | Leave a Comment
Browse Our Archives
get the latest from
Cross Examined
Sign up for our newsletter
POPULAR AT PATHEOS Nonreligious
1