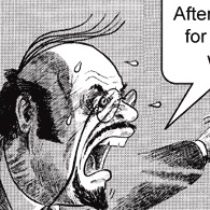 I recently saw the trailer for the upcoming “God’s Not Dead” movie. A Christian college student discovers that his philosophy class is taught by a dictatorial atheist who demands that all students declare that God is dead. He refuses and is forced into public debates with his professor.

Until I’m able to review that movie, and in honor of Darwin Day, I’d like to critique a Chick tract that closely parallels that plot. These arguments are pretty weak, but with the Ham on Nye debate last week, it’s clear that weak evolution-denial arguments are popular in some circles.

Chick tracts are tiny comics handed out to spread the gospel. “Big Daddy?” opens in a biology classroom with a portrait of an ape titled “Our Father.” (As the story progresses, I’ll give my rebuttals in parentheses. Read along, and see if your favorite Creationist claim makes an appearance.)

The professor asks how many of the students believe in evolution. All but one student is on board, and the professor is furious at the holdout. He’s about to expel him from the class but thinks better of it. Destroying the Christian argument will make a good demonstration for the class.

You can’t mention the Bible in school

The student begins by using the word “Bible,” and the professor declares that that is illegal. Here we have the first of many footnotes referencing Kent “Dr. Dino” Hovind. While our nutty professor is wrong that mentioning the Bible is illegal, the footnote is wrong when it says, “it has never been against the law to teach the Bible or creation in public schools.” Teaching the Bible in a comparative religions class is fine, but it’s not legal to evangelize from the Bible or teach Christian creation as science.

Hovind is a poor authority. His doctorate is from a diploma mill, and he’s now serving a ten-year sentence in prison for federal tax evasion.

Does science prove anything?

The professor declares that science proves evolution. (No—mathematics proves things, not science. Science is always provisional. I would say: evolution is the scientific consensus.) He points to carbon-14. (A biologist would likelier point to the entire field of radioisotope dating, not just C-14, which can take us back only about 40,000 years.)

The many flavors of “evolution”

The Christian student argues that there are six kinds of evolution—cosmic evolution, chemical evolution, stellar evolution, organic evolution, macroevolution, and microevolution. Don’t worry about the distinction—it’s not much clearer in the comic. Creationists sometimes argue that “evolution” is ambiguous to justify their use of the word “Darwinism,” but I’ll stick with the term used by biologists.

The student says that all but microevolution are believed by faith. (Science is accepted because of evidence, not faith.)

Piltdown Man was a hoax

Next, he attacks fossil dating by stating that Richard Leakey found a modern skull under 212-million-year-old rock. (Nope. That skull was an early hominid dated to 1.9 million years.) Our precocious student then declares that Lucy was just a chimpanzee, not an early hominid. (I saw Lucy when it toured the U.S. in 2009. Our student is wrong again—the consensus is clear that Lucy is an Australopithecus.)

Next, we see a chart listing various hominid fossils, with comments dismissing each of them. But no biologist would include Piltdown Man (a hoax) and Nebraska Man (an error) on such a list. Other fossils are dismissed as irrelevant, but again, that’s Dr. Dino talking.

Oh dear—Professor Frantic is losing this debate. He changes the subject to the old dates of fossils, and the student charges him with circular reasoning—we know that a layer is old because it has trilobites in it, but we know that trilobites are old because of the age of the surrounding layers. (Which is nonsense. Radioisotope dating is reliable only for igneous rock like basalt or granite. Fossils in a sedimentary layer can be dated by nearby layers of basalt laid down as lava, for example. If there isn’t any convenient igneous layer, new fossils can be dated by using other, known fossils if those fossils were reliably dated at some other site.)

The quick-witted student next brings up what Creationists call polystrate fossils—fossilized trees that intrude through many layers. If layers deposit very slowly, is a dead tree going to sit there, unchanging, for millions of years while the layers of sediment slowly accumulate around it? (The error, of course, is that layers are sometimes laid down very quickly. For example, land can subside during an earthquake. When that land is next to the ocean, many feet of sand can be deposited within hours.)

The professor tries again and says that human embryos have gills, which proves that they evolved from fish. The student points out that Haeckel’s embryos are discredited. (Haeckel made a mistake—get over it.)

But here’s something I don’t get. I realize that Haeckel’s “ontogeny recapitulates phylogeny” has been discarded, but why do human embryos have gill-like features and then repurpose them? Why do they get a tail but then reabsorb it? Isn’t repurposing rather than building something in its final form clues to our earlier ancestors? Point me to something on this if you can.

The professor points to the human tail bone and the pelvis in some whales as vestigial structures. Mr. Smart Ass replies that both bones are useful because they anchor muscles and so aren’t vestigial. (Wrong again. “Vestigial” refers to something no longer used for its ancestral function. Wings on an ostrich are vestigial, not because they’re useless [they’re not] but because they aren’t used for flying. Similarly, the whale’s pelvis isn’t used for providing support for legs, which is what pelvises do.)

The student says, “Even if there were ‘vestigial’ organs, isn’t losing something the opposite of evolution?” (Dude—read a textbook on evolution! Animals evolve by becoming better suited to their environment. We might call that a loss [loss of eyesight in a cave fish or loss of walking for a sea mammal] but that perspective is pointless. By being selected by evolution, these animals have become fitter.)

And we have a winner!

After a bizarre turn where the student rejects the idea of gluons, our bedraggled atheist hero is ready to hear from the Bible. A beaten man at the end, he takes his ape portrait and resigns. The Christian victor wraps it up for his fellow students: evolution is a lie and Jesus saves.

Back in the real world

This is embarrassingly bad science. Creationists, study up on evolution before you try to attack it.

Believers, think about all the things you would do if you were God.
Then contemplate the fact that you worship a God who hasn’t.
— Tiger C. Lewis (paraphrased) 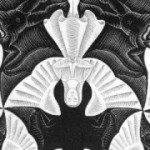 February 10, 2014
What Does the New Testament Say about Homosexuality?
Next Post 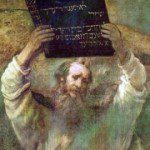 February 14, 2014 The Irrelevant Wisdom of the Ten Commandments
Recent Comments
67 Comments | Leave a Comment
"Probably born out of the war years."
Ignorant Amos Will No One Hold John Hagee ..."
"Lies like a cheap Thai watch.Don can no longer retreat to the position of ignorance.The ..."
Ignorant Amos When Christians Treat God Like a ..."
"Miserable wee bastard by all accounts....So too was Ken Dodd apparently."
epeeist Will No One Hold John Hagee ..."
"Yep, Don lies like Trump."
epeeist When Christians Treat God Like a ..."
Browse Our Archives
get the latest from
Cross Examined
Sign up for our newsletter
POPULAR AT PATHEOS Nonreligious
1

Nonreligious
How Useful is the Bacterial Flagellum for the...
Cross Examined
TRENDING AT PATHEOS Nonreligious