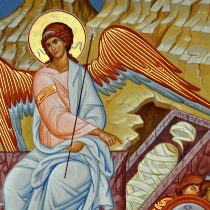 Gary Habermas, a department chair at Liberty University, is known for his minimal facts argument for the resurrection of Jesus. We’ve exposed some weak thinking behind his first two facts in Part 1 here, and we’ll now look at his remaining facts.

You folks at home can join in as we play “Spot that fallacy”!

Fact 3: The church persecutor Paul was suddenly changed: Paul was an enemy of the church but became a persuasive theologian and prolific church builder. His belief came from first-hand experience, and his martyrdom was documented by six sources.

But what could only be explained by an actual resurrection? So Paul gets religion and spreads the word—this isn’t surprising and happens in our own day. The sources we have are Paul’s own writings, Acts, and the writings of church fathers many decades later, all of which we must be skeptical of.

Was Paul knocked to the ground with a vision of Jesus? Maybe it was a complete fabrication. Maybe he just imagined it. Maybe the story grew in his mind until he wrote it down years later. The natural explanations are much more plausible than the supernatural one.

Fact 4: James the brother of Jesus was changed. Habermas takes us on a scavenger hunt through the Bible to pick up various pieces to create a life story for James that pleases him.

The James story varies depending on what pieces you pick up. Mark makes clear that the family of Jesus didn’t believe and never says that they changed their minds. We see this in John as well, where Jesus commanded “the disciple whom he loved” to take care of his mother after he died (John 19:26–7). Why would Jesus do this if his brother James was available? Both of these gospels were written long after the death of James. Perhaps they never mentioned James as part of the inner circle because he wasn’t.

And what does “James, the Lord’s brother” (Gal. 1:19) mean? That James was the biological brother of Jesus or simply that James was one of the Christian brethren (as in “brothers and sisters loved by God” from 1 Thess. 1:4)?

The basic facts of James’s life are tentative enough. The story can’t support the additional claim that he saw the risen Jesus.

Fact 5: The tomb was empty. This is a bonus “fact” because it isn’t as widely accepted as Habermas claims the previous four are. He says that “75% of scholars on the subject accept the empty tomb as a historical fact,” but we’ve already exposed the weakness of that approach.

He’s quick to use the flawed Naysayer Hypothesis again:

It would have been impossible for Christianity to get off the ground in Jerusalem if the body [of Jesus] had still been in the tomb. His enemies in the Jewish leadership and Roman government would only have had to exhume the corpse and publicly display it for the hoax to be shattered (p. 70).

First, I argue that it was a legend, not a hoax (that is, that it was inadvertently rather than deliberately false). Second, show me that valid evidence always stops a religion. Third, remember that the gospel stories were written decades after the events they claim to document. By that point, the legend had a life of its own. What the leadership might’ve done (or even did do) years earlier is irrelevant at that point.

Women were the first to discover the empty tomb. This is startling, we’re told, because women’s testimony was never allowed in court, but what Habermas fails to show is that courtroom testimony is ever part of the story! He says that women playing this central role would never be part of an invented story, but I never argue that the story was invented.

Habermas’s argument completely fails when we consider that tending to the dead was women’s work in that culture. Having women—remember that these were trusted members of the inner circle—find the empty tomb was not startling but culturally mandatory (more here).

Habermas sets up and knocks over the typical list of imagined responses (that I never make) such as the disciples stole the body, someone else stole the body, witnesses went to the wrong tomb, Jesus didn’t die but only swooned, the disciples were deceived by delusions or hallucinations, and, my favorite: Jesus was an alien. It’s curious that he treats the obvious one—that it was a legend—so superficially that there’s nothing more for me to address.

If a body of any sort was discovered in the tomb, the Christian message of an empty sepulcher would have been falsified. Anything but an empty tomb would have been devastating to the Resurrection account (p. 71).

Can this guy have no appreciation of how religion actually works? He imagines it to be a house of cards, knocked down by a single contrary word.

Consider the Great Disappointment of 1844, where tens to hundreds of thousands of Millerites woke to the day that should never have dawned, the day after William Miller’s prediction of the end of the world. Some left the sect, poorer but wiser. Others refused to believe that they’d been following a ridiculous interpretation of reality and formed other sects, including the Seventh-Day Adventist Church.

Or consider a more recent example. Pastor Jamie Coots died from snakebite a few days ago after refusing medical treatment. That was his ninth snakebite. He and his congregation knew better than anyone that God doesn’t protect believers against snakebite, and that if you handle poisonous snakes, you risk getting bitten and dying. I wonder if, as Coots lay dying, any friends said, “You have strong faith, brother.”

But the good news is that snake handlers finally got the message, right?

Of course not. Snake handlers could admit that all available evidence points to either no God or a God uninterested in protecting Christians from the obvious consequences of snake handling, but few will. They make themselves immune to the evidence.

Back to Habermas’s argument, the legend has little interest in what actually happened decades earlier—whether the tomb was empty, full, or nonexistent. Even if there were disconfirming evidence, the early religion could’ve shrugged it off just like snake handlers do. That Habermas doesn’t understand this makes me question how serious he actually takes his scholarship.

For some lessons learned from studying this argument, go here.

February 19, 2014
Responding to the Minimal Facts Argument for the Resurrection
Next Post