The Irrelevant Wisdom of the Ten Commandments

The Irrelevant Wisdom of the Ten Commandments February 14, 2014 Bob Seidensticker 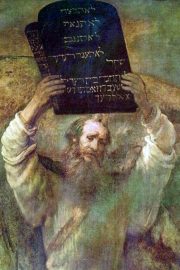 Few Christians can list the Ten Commandments in order, but almost all are familiar with them:

These are the well-known Ten Commandments from Exodus 20. What could be ambiguous about this list? Stay tuned as we run through the story.

It takes 11 more chapters for God to finish giving all his secondary commandments, first rules for how the people should conduct themselves and then rules for the temple and priests.

After weeks of waiting for Moses to return from Mt. Sinai, the anxious Israelites make a golden calf in chapter 32. Moses is furious when he returns. He smashes the tablets, has the calf ground up and force-fed to the faithless people, and orders the Levites to slaughter thousands of their fellow tribesmen.

Then follows an indeterminate amount of time during which God descended on Moses’ tent as a pillar of smoke and “the LORD used to speak to Moses face to face, just as a man speaks to his friend.”

Back to our story: Moses goes up Sinai a second time in Exodus 34. God says, “I will write on the tablets the words that were on the former tablets which you shattered,” so we know that this nothing new, just a replacement set of commandments. But the contents are very different:

The chapter ends with these words: “And [Moses] wrote on the tablets the words of the covenant, the Ten Commandments.” This is the first time this label is used in the Bible.

You want to display the Ten Commandments in public? Go for it, but put up this list. It’s the official list, after all. These are the ten that wound up in the Ark of the Covenant.

Contrast this with the story of the first tablets, which concludes at the end of chapter 31, “[God] gave Moses the two tablets of the testimony, tablets of stone, written by the finger of God.” There is no mention of a “ten commandments,” and these stone tablets presumably contain all of the rules given in chapters 20 through 31.

Another detour: chapter 34 has this savage claim, “[God] will by no means leave the guilty unpunished, visiting the iniquity of fathers on the children and on the grandchildren to the third and fourth generations” (Ex. 34:7). And yet, three books later, we get this contradiction: “Fathers shall not be put to death for their children, nor children put to death for their fathers; each is to die for his own sin” (Deut. 24:16).

I’ve heard this rationalized this way: Deut. 24 is talking about what man must do. Man needs to treat people fairly and punish only the wrongdoers. Ex. 34 is talking about what God will do. God has a long memory and will hold a grudge against you to punish your descendants. It’s odd that Christians would imagine that God does something that is clearly immoral in our eyes. Anyway, God figures it out later: “The one who sins is the one who will die” (Ezekiel 18:4).

Speaking of punishments, the Ten Commandments list crimes without giving punishments. For you traditionalists who like the “thou shalt not” set of commandments, Positive Atheism has handy list of the corresponding punishments. God has a pretty limited imagination, and you can guess what they are: “He who sacrifices to any god, other than to the LORD alone, shall be utterly destroyed” (Ex. 22:20), “the one who blasphemes the name of the LORD shall surely be put to death” (Lev. 24:16), and so on.

Display the Ten Commandments in public, just put up the correct ten. Let’s finally put a stop to the abomination that is young goat cooked in goat milk.

Say what you will about the Ten Commandments,
you must always come back to the pleasant fact
that there are only ten of them.
— H. L. Mencken 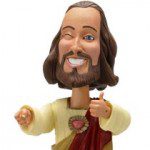 February 17, 2014 Scholarly Consensus for the Resurrection?
Recent Comments
166 Comments | Leave a Comment
Browse Our Archives
get the latest from
Cross Examined
Sign up for our newsletter
POPULAR AT PATHEOS Nonreligious
1