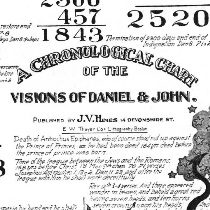 Scholars are largely agreed that Daniel’s “prophecies” are actually prophecies after the event. This happens so often that it has its own scholarly name: vaticinia ex eventu.

The book was written in about 165 BCE (as discussed in Part 1 of this topic), not during Daniel’s sixth-century captivity. Though there may be debate on the issue, this late dating is not atheists’ flagrant attempt at avoiding compelling evidence for a miraculous prophecy in the Bible.

More than just the “prophecies” failing after around 165 BCE point to this date. Daniel wasn’t included in the Hebrew Bible’s canon, which was closed around 200 BCE; it wasn’t referenced in the Wisdom of Sirach (c. 180 BCE), which referenced almost every other book of the Old Testament; and it makes errors in the oldest historical claims (for example, it claims that Darius the Mede conquered Babylon, though this king is unknown to history).

Daniel looks very much like other apocalyptic writings of the period such as Baruch, Esdras, and the books of Enoch. These works are not anonymous but are pseudonymous—falsely attributed to a respected figure of antiquity. A “rediscovered” old book from an ancient authority would carry much weight. Many of these books used Daniel’s trick of listing “predictions” from known history so that whatever had yet to occur would seem credible. Finally, these apocalyptic books all predict that our painful age will soon end.

Daniel 9:24–7 gives the famous prophecy that many think predicts the crucifixion of Jesus. I’ll summarize the claims that it makes, sometimes with a paraphrase, but feel free to check this against the actual text.

I. “Seventy weeks [“week” is used here to mean seven years, not seven days] are decreed for your people and your holy city to finish transgression, to put an end to sin, to atone for wickedness, to bring in everlasting righteousness, to seal up vision and prophecy and to anoint the Most Holy Place.”

Equating a week with 7 years, like we call 10 years a “decade,” is seen in Greek literature, so this is a reasonable interpretation. The use of 70 comes from Jeremiah’s prophecy that the Judean captives taken to Babylon would return after 70 years.

II. “From the time the word goes out to restore and rebuild Jerusalem until the Anointed One, the ruler, comes, there will be seven weeks and sixty-two weeks.”

When does the clock start? From the command to rebuild Jerusalem. When does it end? When the Anointed One comes. This isn’t a messianic reference, however, because “anointed one” can be applied to many people, including the high priest.

Pulling out the 7 weeks is confusing. Is it concurrent with the 62 weeks? If so, why even mention it (except to find a way to get to 70)? Or does the 62 weeks follow the 7-week period? If so, why not just add them together (except as an excuse to use the number 7, the number of completion)? No commentator has a great answer.

III. After 62 weeks, the Anointed One will be put to death.

IV. “The ruler who will come” will destroy (or corrupt) the city and the sanctuary.

V. War will be continuous, and then the end will be swift.

VI. This ruler will make a covenant with many for one final week.

VII. In the middle of this 7-year period, the ruler will prevent Temple offerings. “And at the temple he will set up an abomination that causes desolation, until the end that is decreed is poured out on him.”

Halfway through this final week, Jesus (the Anointed One) is put to death, which finishes the “transgression” and brings in “everlasting righteousness.”

The final week ends in 33 CE, with the conversion of Paul and Cornelius and inaugurating the mission to the Gentiles.

Problem 1: There are loads of problems. First, the weeks are off. Even if you infer that the Anointed One will be killed after the 62 weeks which begins after the 7 weeks (which isn’t really what it says), that makes his death in 26 CE, too early. And the first point makes clear that the atonement happens at the end of the 70 weeks, not halfway through the final week. The Anointed One’s death can’t be the atonement, since they’re separated by that final week.

Problem 2: It has no explanation for the destroying “ruler who will come” and the “abomination that causes desolation.”

Problem 3: It makes no sense of the 7 week/62 week distinction. Why not just say 69 weeks?

Problem 4: The decree from Ezra 7 is just one of at least four plausible starting dates. Why this one?

Problem 5: It ignores the overwhelming evidence that the final week was roughly 171–164 BCE (see previous post).

Problem 6: Remember the last time we saw the phrase “abomination that causes desolation”? It was the sacrifice of pigs to Zeus in the Jewish Temple, as ordered by Antiochus Epiphanes. Bringing Antiochus in would address more than this—“the ruler who will come” to destroy, continuous war (the beginning of the Maccabean Revolt), the covenant (Antiochus made agreements with Hellenistic Jewish leaders, splitting them away from the traditionalists), and so on.

Part 2: a different Christian interpretation of this prophecy that claims consequences in our own day here.

Faith isn’t a virtue;
it is the glorification of voluntary ignorance.
— Anonymous

March 19, 2014
Liars for Jesus: Does Daniel Predict the Future?
Next Post

March 23, 2014 What Did the Original Books of the Bible Say?
Recent Comments
214 Comments | Leave a Comment
Browse Our Archives
get the latest updates from
Cross Examined
and the Patheos
Nonreligious
Channel
POPULAR AT PATHEOS Nonreligious
1