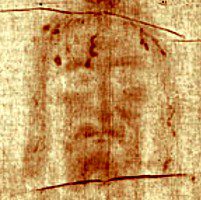 The Shroud of Turin is a 14-foot-long linen cloth with the faint image of a man. Imagine the cloth going from feet to head along a man’s back, then folding over the head to continue back to the feet.

Many Christians think that it is the burial shroud of Jesus and that the supernatural energy of resurrecting his dead body burned an image into the cloth. It first appeared in history in 1390 in France, and it was moved to Turin, Italy in 1578. Fire and water damage from 1532 are visible on the shroud.

Proponents argue that marks from Jesus’s last hours are on the figure—the nail wounds, the scourgings, and the cuts from the crown of thorns—but is this the real burial shroud of Jesus?

Which do we believe: the Shroud or the Bible?

The first problem is scriptural. The shroud doesn’t fit with the story of the empty tomb from the Bible.

[Simon Peter] saw the strips of linen lying there [in the tomb], as well as the cloth that had been wrapped around Jesus’ head. (John 20:6–7)

Strips of linen (presumably for the body) and a separate head cloth is not a single shroud. And there is no evidence besides the shroud itself to imagine that first-century Jews buried their dead that way.

They took the body of Jesus and bound it in linen wrappings with the spices, as is the burial custom of the Jews. (John 19:40)

This wasn’t just a pinch of spice—it was 75 pounds worth (John 19:39). The bare body we see in the image shows no evidence of this massive amount of spice.

If the Shroud were real, what would the image look like?

Next, an artistic problem. If a linen cloth were laid over a prone person, it would drape over the sides of the face. That is, it would wrap around to some extent.

A typical man’s face is roughly six inches wide. But it’s more like eleven inches from one ear, across the face, to the other ear. Granted, the shroud wouldn’t be vacuum-sealed to hug the face completely. But we would expect to see some wraparound distortion to the image when the shroud was later laid flat. The face image is actually thinner than an ordinary person’s face, not wider as it ought to be. Even when ignoring the lack of distortion, the head is far too small. The brain size would’ve been about two thirds that of an ordinary human.

The figure on the shroud politely covers his nether region. Try lying down and doing the same thing—your arms won’t be long enough.

He’s also about six feet tall, while the average Jew was roughly eight inches less, and yet nothing is mentioned in the gospels about this remarkable height.

How common were forgeries?

Could this have been a hoax or some other fake? Traffic in holy Christian relics was big business during the medieval period—it’s been said that there were enough pieces of the cross to build a ship and enough nails from the crucifixion to hold it together. This wasn’t the only shroud—history records forty of them. Obviously, at least 39 of these must be false.

In fact, our first well-documented discussion of the shroud in 1390 states that it is a forgery and that the artist was known.

(An aside: I’ve written before about the apologists’ Naysayer Argument, the claim that the gospel story must be true because, if it weren’t, rebuttals from contemporaries would have shut it down immediately. The Shroud debate nicely defeats this argument. Our oldest reliable source is a rebuttal of the supernatural claim of the shroud, and yet this obviously didn’t eliminate Christian belief in it.)

The image of a person being magically transformed into an icon (like a face onto a cloth) is called an acheiropoieton. The shroud is just one of several examples, including the Image of Edessa, Veil of Veronica, and Virgin of Guadalupe.

Many problems argue against the shroud being the real thing. Carbon dating says that the linen is from the 1300s, there is evidence of tempera paint creating the image, 2000-year-old blood should be black and not red, pollen on the shroud seems to be only from Europe and not also Israel, the weave of the fabric doesn’t appear to be authentic, and so on. Christian apologists have a different way to rationalize away each of these problems, but the most economical explanation, the single argument that neatly explains the evidence, is that it’s a fake.

There’s a surprisingly large amount of information on this topic. It is clearly important for a lot of people. The best that can be said of the shroud is that we can’t prove that it wasn’t the burial cloth of Jesus. But that’s no reason to believe that it was, at least for anyone who cares to follow the evidence.

(This is a modified version of a post that originally appeared 4/4/12.) 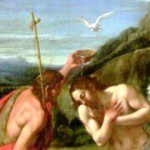