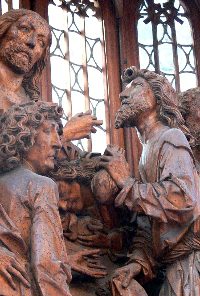 In November, 2007, Senator Chuck Grassley (R-Iowa) asked six high-profile televangelist organizations to provide more information about how they work. Grassley said: “My goal is to help improve accountability and good governance so tax-exempt groups maintain public confidence in their operations.”

Targets of the Grassley investigation

Here are the investigated organizations (I’ll use the names of the public faces) and the results of the inquiry.

Let’s dwell on this a moment. A U.S. senator asks for information, as the Senate Finance Committee is empowered to do, and he is (more or less) given the finger. And there is no fallout? These ministries can tap dance away from this request for information with no meaningful loss of face? The faithful still shower them with $100 million per year? What kind of disconnect from reality is this?

This is a contract between U.S. taxpayers and these nonprofit organizations, mediated by the IRS. We provide the nonprofit status and, in return, they prove that they deserve that status. If religious organizations policed themselves and they made their finances public (by voluntarily submitting their information to the IRS like all other nonprofits), this wouldn’t be a problem. But they don’t. With $100 billion in tax-exempt contributions to the religion industry every year, shielded from inspection, it’s obvious that this exemption is a bad idea.

A memo prepared by Sen. Grassley’s staff highlights some of the foundational principles that are relevant to this discussion.

The Constitution does not require the government to exempt churches from federal income taxation or from filing tax and information returns.

Requiring churches to file an annual information return does not offend either the Free Exercise Clause or the Establishment Clause [of the First Amendment].

Some ministries have complained that an obligatory filing would entangle the government in church business, but the opposite may be more accurate. Today, the IRS must define what a church is, since the legal code doesn’t. For example, after a long legal battle, Scientology was granted tax-exempt status as a church. Putting churches in the same bin as other nonprofits would eliminate this unwelcome role for the IRS.

The Grassley memo admits that there should be no constitutional problem with a level playing field, but it argues that some problems will remain:

The ECFA is a good step. Though it’s expensive to join, it provides what amounts to a Good Housekeeping seal of approval to ministries that abide by its code. But even they don’t demand that salaries be revealed, and members need only provide financial information on written request. It’s a baby step, when a level playing field is the obvious solution.

The IRS has a form 990 and 1.5 million nonprofit organizations already using it. It works. It should be our window into the operation of all nonprofits, including churches.

What are the next steps? An atheist organization like the Freedom From Religion Foundation could file lawsuits, but a push for this from within the Christian community would be far more effective. Christians, you have the power. Aren’t you embarrassed by being lumped in with the worst of the televangelists? Wouldn’t you like to see some public scrutiny on Scientology and other organizations hiding behind this loophole?

You won’t like me when I’m angry,
because I always back up my rage
with facts and documented sources.
— the Credible Hulk

May 23, 2014 Are Churches More Like Charities or Country Clubs?
Recent Comments
39 Comments | Leave a Comment
Browse Our Archives
get the latest from
Cross Examined
Sign up for our newsletter
POPULAR AT PATHEOS Nonreligious
1

How the Satanic Panic Led Straight to QAnon
After a couple of years of ignoring the whole thing, evangelical leaders...
view all Nonreligious blogs
What Are Your Thoughts?leave a comment
Copyright 2008-2020, Patheos. All rights reserved.