Ten Commandments Have no Role in Public

Ten Commandments Have no Role in Public May 31, 2014 Bob Seidensticker 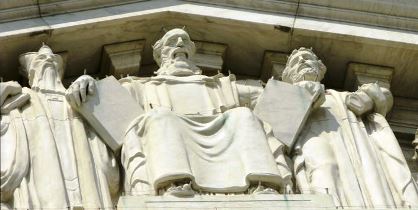 Some Christians have no patience with a separation between church and state and want to display the Ten Commandments in the public square—the state-supported public square.

As chief justice of the Alabama Supreme Court, Judge Moore installed a 2.5-ton granite monument in the Supreme Court building showing two tablets holding the Ten Commandments in 2001. He said, “Today a cry has gone out across our land for the acknowledgment of that God upon whom this nation and our laws were founded. … May this day mark the restoration of the moral foundation of law to our people and the return to the knowledge of God in our land.” A lawsuit was filed, Moore lost, he was ordered to remove the monument, he refused, and he was removed from office in 2003.

In 2012, the good people of Alabama gave him his old job back. We live in interesting times.

Who knows the Ten Commandments?

One atheist wit observed that the Big Mac had an unfair advantage—it had a jingle. Solution: set the Ten Commandments to music. “Only God, no idols, watch your mouth, special day, call your mom … on a sesame seed bun.”

How big a deal is this? Does poor recall of the Ten Commandments correlate to poor morals? I say no, and I think Americans’ poor memory in this case isn’t a shocking oversight; instead, it reflects the irrelevance of the Ten Commandments in modern life. We don’t need the Commandments to remind us that killing is wrong, and they’re not an especially complete or relevant list for secular America. “Don’t enslave,” “don’t rape,” and “no genocide” are glaringly absent, and “have no other gods before me” has no place in a country with a First Amendment to keep the state out of religion.

(Sorry, pro-lifers—abortion was obviously not top of mind for God when he dictated the Commandments, since he included “don’t covet” but omitted “no abortion.”)

When the Old Testament becomes a problem

To wiggle out of uncomfortable baggage, some Christians try to play the “Get out of the Old Testament free” card. They do this when they want to give God a hand, and they say that slavery and genocide were products of that archaic culture. Okay, but then haven’t you shed the Ten Commandments as well, since that’s also in the Old Testament?

The Old Testament is relevant today or it isn’t—it can’t be both ways.

As ancient legal codes go, the Mosaic law isn’t all that groundbreaking. It is predated not only by the Babylonian Code of Hammurabi but Mesopotamian law and Egyptian law. In fact, the pediment of the U.S. Supreme Court building, which many history revisionists claim holds the Ten Commandments, is actually a frieze of Moses along with two other ancient lawmakers, Solon of Athens and Confucius of China (shown in the photo above). And no, Moses isn’t holding the Ten Commandments but rather blank tablets. Moses is also depicted on a frieze inside the courtroom, but he is simply in a procession of 18 great lawmakers.

What if all people followed the basic conventions that society agrees are its moral foundation? That would be great, but if this happened, why give the credit to Christianity? That is, why point to morality and say, “Aha! That’s the good ol’ Ten Commandments they’re following!” No, morality comes from society. The Ten Commandments are a clumsy reflection of some of the best traits from society, not the other way around.

What if we discarded the religious baggage—important within Christianity but irrelevant to the secular, all-inclusive society—and distilled down social wisdom into a secular Ten Commandments? Here’s a version from A.C. Grayling’s Secular Bible.

NYC Atheists has an excellent version here (search for “Atheist Freedoms” on page 4). And here is Christopher Hitchens’ version (skip in the video to 6:30). Hitchens’ punch line: “Don’t swallow your moral code in tablet form.”

The Ten Commandments is nothing more than a fragment of an interesting historical document. An example from Georgia shows the problems with treating it as if it’s more than this. Poverty in that state has recently increased so that it is now the third-poorest state. What did its legislature spend time on in response? Getting the Ten Commandments in all public buildings, including schools.

Posturing is easier than actually solving problems, right? And it gets one reelected, so it’s all good.

Men never do evil so completely and cheerfully
as when they do it from religious conviction.
— Pascal