How Decades of Oral Tradition Corrupted the Gospels 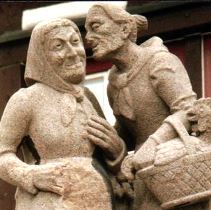 (See the first in this series of posts traveling the tortuous journey from 21st-century Western culture back to the original story of Jesus here.)

Imagine that the year is 50 CE and you are a merchant in Judea or Galilee. A traveler stops at your house and asks for lodging, and you comply. After dinner, you chat with your new acquaintance and mention that you have recently become a follower of the Jewish messiah, Jesus. He is unaware of Jesus and asks to hear more, and you tell the complete gospel story, from the birth of Jesus through his ministry, miracles, death, and resurrection. Your guest is excited by the story and eager to pass it on. He asks that you tell it again.

Instead, you ask him to tell the story so that you can correct any errors. He goes through the story twice, with you making corrections and adding bits to the story that you’d forgotten in the first telling.

You’ve now spent the entire night telling the powerful story, but you and your new friend agree that it was time well spent. He is on his way, and a week later the events are repeated, but this time your friend plays host to a traveler and the Good News is passed on to a new convert.

Imagine how long you would need to summarize the gospel story and how many times you’d need to correct yourself with, “Oh wait a minute—there was one more thing that came before” or “No, not Capernaum … I think it was Caesarea.” That confusing tale would be a lot for an initiate to remember, and yet this imaginary encounter was about as good as it got for passing on so complex a story. Consider other less perfect scenarios—getting fragments of the story from different people over months or years or having two believers arguing over details as they try to tell the story in tandem.

“And then Jesus healed the centurion’s slave—”

“No, no—that’s when he healed the daughter of Jairus! Or Gyrus, or something. And it wasn’t the centurion’s slave, it was his son. Or maybe his servant, I forget.”

Apologists appreciate the problem of oral history when they argue that the earliest gospel was written just 20 to 30 years after the resurrection instead historians’ typical estimate of 40 years, but this does little to resolve the problem.

Let’s give them that. Let’s assume just twenty years of oral history in a pre-scientific culture produced a story about the Creator of the Universe coming to earth. What certainty can we have that such a whopper is correct?

Christians and atheists can agree that the period of oral history is a concern, but what is rarely acknowledged is the translation that happened at the same time.

To see this, first consider a different example. In response to the 1858 sightings of Mary at Lourdes, France by a 14-year-old girl named Bernadette, the local bishop investigated and concluded a year and a half later that the sightings were genuine. Bernadette and the bishop were from the same culture and spoke the same language.

The gospel story had a much more harrowing journey. Jesus and his disciples spoke Aramaic and came from a Jewish culture, but this isn’t where the gospel came from. Every book in the New Testament was written in Greek and came from a Greek culture. The story would have been heard in and (to some extent) adapted to a Greek context.

For example, imagine a gospel without the water-into-wine story. “Wait a minute,” the Greek listener might say. “The Oenotropae could change water into wine. If Jesus was god, couldn’t he do that as well?”

Or imagine a gospel without the healing miracles. “Asclepius was generous with his healing gifts and even raised the dead. Didn’t Jesus do anything like that?”

Or a gospel without the resurrection. “Dionysus was killed and then was reborn. You mean Jesus just died, and that was it?”

In fact, the earliest books in the Bible are Paul’s letters, which have almost nothing of the gospel story—no healings, no parables, no feeding the 5000, and no virgin birth. The Jesus of Paul performs no miracles, gives no Sermon on the Mount, has no public ministry, and gives no Great Commission. Might passage through Greek culture have added some of these elements?

Humans have a long history of adapting gods to their own culture—for example, the Greek god Heracles became Hercules when he was adopted by the Romans. Athena became Minerva, Poseidon became Neptune, Aphrodite became Venus, and Zeus became Jupiter. The Hebrews adopted the Mesopotamian flood story of Gilgamesh as well as the Sumerian water model of the cosmos.

We know how stories evolve in our own time. As Richard Carrier notes (video @ 26:00), the evolution of the Jesus story is like the evolution of the Roswell UFO Incident. A guy finds some sticks and Mylar in the desert, and this was interpreted as debris from a crashed spaceship. But within 30 years, the story had morphed. Now, a spaceship crashed in the desert, and the military autopsied the dead aliens and is reverse-engineering their advanced technology.

Spreading the Word in an oral culture

Let’s return to your telling the story to the new convert. How close was your version of the story to that in the New Testament? And how similar would the new guy’s telling of the story be to the one that you told him? How much variation is added with each retelling?

The gospel story was an oral tradition for four decades or more before finally being written down. That’s a lot of time for the story to evolve.

Christians may respond that by relying on writing, our memory skills have atrophied. In an oral culture like that in first-century Palestine, people became very good at memorization.

Yes, it’s possible that people memorized the Jesus story so that they could retell it the same as it was taught to them, but there is no reason to imagine that this was how it was passed along. Indeed, it’s wrong to assume that storytellers in an oral culture always wanted to repeat a story with perfect accuracy. We care about perfect accuracy because we come from a literate culture. Only because we have the standard of the written word do we assume that other cultures would want to approximate this unvarying message.

The theory of oral-formulaic composition argues instead that tales are often changed with the retelling to adapt to the audience or to imperfect memory. Any transcription of such a tale (like a single written version of the Iliad) would simply be a snapshot of a single telling, and you would deceive yourself if you imagined that this gives an accurate record of the story. This is seen in modern-day oral epic poetry in the Balkans and is guessed to be the structure of Homeric epic storytelling as well.

But this is a tangent. The gospel story wasn’t an epic poem, but rather a story passed from person to person. It changed with time, just like any story does.

The gossip fence is a better analog than Homer.

Read the first post in this series: What Did the Original Books of the Bible Say?

When a person is determined to believe something,
the very absurdity of the doctrine confirms them in their faith.
— Letters of Junius 12/19/1769 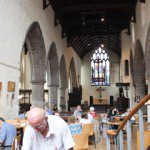 November 5, 2014
I’ve Seen the Future of the Church
Next Post