A Distillation of Crazy 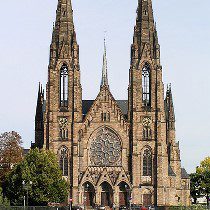 John Warwick Montgomery is not as prominent as he had been, but he was the William Lane Craig of his day. According to his web site, he is “considered by many to be the foremost living apologist for biblical Christianity.” He’s quite proud of his 11 earned degrees, including three doctorates, and he likes to be introduced in the European convention, “Dr Dr Dr Montgomery.”

I attended his two-week International Academy of Apologetics, Evangelism and Human Rights in Strasbourg, France in 2011. Despite assurances to the contrary, it didn’t make me a believer.

I went to find the best apologetics arguments. Was the good stuff backstage, reserved for the serious students of the art? I wanted to see. What I found was the same tired arguments.

Dr Dr Dr Montgomery is a frequent guest on the Issues Etc. radio show. Recently, he was on to respond to Bart Ehrman’s book How Jesus Became God (2014). Here are a few excerpts that highlight the thinking of the “foremost living apologist.” I think you’ll agree that it’s a rich vein of crazy.

I suppose it’s nice that [Ehrman] wants everybody to love each other, but if there isn’t any god and there’s no last judgment, I’d like to know why anyone should bother with anybody else. I mean certainly, it would be looking out for Number One … it would be a matter of feathering our own nest and certainly not paying attention to anybody else.

You don’t know why anyone should bother with anyone else? The reason isn’t hard to find—evolution selects for positive traits like trustworthiness, generosity, and self-sacrifice in social animals like apes (which includes us). We find those traits laudable because evolution has made that part of our programming. But the reason is irrelevant. We obviously don’t just look out for Number One, so Montgomery’s instincts have led him astray.

If being a Christian keeps some people from being thieves and murderers, I guess it’s good that they’re Christian!

And all of the horrors of atheistic totalitarianisms could never be criticized; there isn’t any last judgment; Hitler and Stalin—they just die like anybody else, and they can get away with it.

(1) Show me just one person killed in the name of atheism. Can’t do it, can you? There is nothing behind atheism except for the very simple lack of belief in gods. Christianity and other religions, by contrast, have libraries of books analyzing their holy books and traditions—or criticizing the analysis or traditions of other sects of their religion.

Atheism makes no moral claims or demands. It provides no moral framework. That’s not a lack; it’s just a fact. (Contrast it with the elaborate morality we find in the Bible that looks pretty shabby when examined in a modern light.)

(2) Montgomery says that the horrors of evil regimes “could never be criticized,” but of course nonbelievers criticize wrongdoing all the time. What he means, I’m sure, is that they can’t criticize while also rejecting Christianity’s objective morality. But that’s nonsense as well. There is no evidence supporting claims of objective morality. My moral relativism (morality is sourced inside people, not outside) has no problem pointing out errors. Where you and I differ on moral issues, I think you’re wrong—who does it any differently?

(3) He thinks that evil dictators have their way with the world and then just die, avoiding any punishment.

In the first place, that a worldview has a more pleasing view about something than another is no indication of the correctness of that worldview. I hope we can agree that truth is the bottom line.

In the second, yeah, bad people sometimes just get away with it. That bugs me, too, but what are you going to do about it? It’s reality. Aren’t we adults here? I can’t consider this view without imagining a furious red-faced five-year-old stamping her feet because she didn’t get her way.

In the third place, why is the Christian view of justice any more satisfying? Maybe Stalin or Hitler had deathbed conversions. They could be up in heaven right now, playing canasta with Jesus or giving him a foot massage. How is that justice for their crimes?

Once more from Montgomery:

A society without a foundation in a belief in God and in the last judgment is a society in which people will try to get away with anything they possibly can, and it’s simply an invitation to chaos, bedlam, and anarchy. Poor Ehrman is obviously entirely unaware of the consequences of the belief system that he represents.

Chaos, bedlam, and anarchy? I’ll keep that in mind if I need a name for a band.

Evolution nicely explains why people don’t always try to get away with murder. And history is full of non-Christian societies from around the world where people were sort of good and sort of bad, just like today—ancient Greece, Rome, and Egypt, for starters.

As for clueless Ehrman bumbling through life unaware of what his belief system means, I often hear this obnoxious and groundless confidence. I guess you double down on confidence when you don’t have an actual argument.

If the Bible and my brain are both the work of the same infinite god,
whose fault is it that the book and my brain do not agree?
— Robert G. Ingersoll

December 21, 2014 Disambiguation: Legend, Myth, and More
Recent Comments
598 Comments | Leave a Comment
Browse Our Archives
get the latest from
Cross Examined
Sign up for our newsletter
POPULAR AT PATHEOS Nonreligious
1