In the beginning … God walked in the Garden of Eden like an ordinary supernatural Joe. He dropped by Abraham’s for a cup of coffee and a chat. He didn’t know what was up in Sodom and Gomorrah and had to send out angelic scouts for reconnaissance: “I will go down and see if what they have done is as bad as the outcry that has reached me” (Genesis 18:20–21). God didn’t know the depths of Abraham’s faith and had to test it. Afterward Abraham proved willing to sacrifice Isaac, he says, “Now I know that you fear God, because you have not withheld from me your son” (Gen. 22:12).

But, like Stalin gradually collecting titles, God has now become omniscient and omnipotent. He’s gone from needing six days to shape a world from Play-Doh and sprinkle tiny stars in the dome of heaven to creating 100 billion galaxies, each with 100 billion stars.

If God is to change with time, you’d think that his biblical demonstrations of power would likewise increase with time, but the reverse is true. From creating the universe, he’s weakened such that appearing in a grilled cheese sandwich as Jesus is about as much as he can pull off today. He has the fiery reputation of the Wizard of Oz but is now just the man behind the curtain.

Even God’s punishments became wimpier. A global flood, with millions dead is pretty badass. Personally smiting Sodom and Gomorrah is impressive, though that’s a big step down in magnitude.

And it’s downhill from there—God simply orders the destruction of Canaanite cities, and to punish Israel and Judah, he doesn’t do it himself but allows Assyria and then Babylon to invade. As Jesus, he doesn’t kick much more butt than cursing a fig tree, and today he simply stands by to let bad things happen.

It’s almost like the Bible is mythology and legend, and God’s followers have boosted their own self-image by boosting the image of their god.

Photo credit:Why There is no God 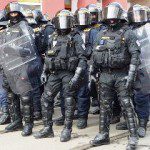 January 13, 2015 20 Arguments Against Same-Sex Marriage, Rebutted (Part 3)
Recent Comments
289 Comments | Leave a Comment
"I think what you see is a standardized story that was told again and again ..."
SDV Bad atheist arguments: “History is unreliable”
"This is the one I found. Compare zondervians presentation of this, about 1/3 down the ..."
SDV Bad atheist arguments: “History is unreliable”
"I regret having failed to read your comment years ago. But I must forthrightly state ..."
SecMilChap Lee Strobel’s “Case for Christ”: the ..."
"And if that nurse had been Muslim and said Mohammad sent her...."
Bob Jase Lee Strobel’s “Case for Christ”: the ..."
Browse Our Archives
get the latest updates from
Cross Examined
and the Patheos
Nonreligious
Channel
POPULAR AT PATHEOS Nonreligious
1