The Dunning-Kruger Effect: Are the Stupid Too Stupid to Realize They’re Stupid? 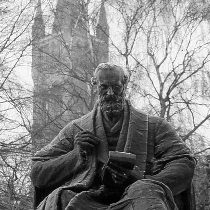 It’s not just your imagination. This is a genuine cognitive bias called the Dunning-Kruger Effect.

The Dunning-Kruger experiments behind the research focused on cognitive tasks (logic, grammar, and evaluating humor), but similar disparities exist in other areas. In self-assessment of IQ, below-average people overestimated their score and those above average underestimated.

Studies of healthy and unhealthy behaviors are handicapped when they rely on self-reporting because test subjects tend to improve their evaluation. In self-evaluations of driving ability, job performance, and even immunity to bias, we tend to polish our image.

This is called the Lake Wobegone Effect, named after the town where “all the children are above average.”

Notice that there are two different categories of error:

(1) the error where there is a preferred answer and most people are biased toward giving that answer (“How much snack food do you eat?” or “How popular would you say you are?” or “How good a driver are you?”), and

(2) the error where bias changes depending on actual competence, with the less and more competent groups rating themselves too high and too low, respectively.

Let’s look at the second category, where the two extremes make opposite errors. The Dunning-Kruger research hypothesizes that the competent overestimate others’ skill levels. But the error is more complicated for the incompetent—they overestimate their own skill level and they lack the metacognition to realize their error. In other words, they were too incompetent to recognize their own incompetence. Improving their metacognitive skills drove down their self-assessment scores as they became better evaluators of their own limitations.

The original paper was titled, “Unskilled and Unaware of It,” for which the authors won an Ig Nobel Prize in 2000.

The trouble with the world
is that the stupid are cocksure
and the intelligent are full of doubt.
— Bertrand Russell

February 20, 2015
Did You Hear? North Korea’s “Brilliant Comrade” Got a Haircut!
Next Post