Being on the Wrong Side of History on Same-Sex Marriage? Worse than You Think.

Being on the Wrong Side of History on Same-Sex Marriage? Worse than You Think. April 2, 2015 Bob Seidensticker

It’s easy to believe passionately in the rightness of our moral position. What’s often ignored is the importance of being in the right side of history.

Same-sex marriage is one example of a contentious moral issue being fought over in America today, and passions run strong on both sides. The National Black Church Initiative, a coalition of 34,000 churches, recently cut ties with the Presbyterian Church USA after they liberalized their definition of marriage to “two people, traditionally a man and a woman.”

Growing acceptance of same-sex marriage has pushed many conservatives to fear the sky is falling. Rick Santorum, Republican presidential candidate in 2012, thinks he sees in American culture the gradual erosion of rights that Jews and Christians experienced in Nazi Germany. The title of Santorum’s new documentary film reveals how soon he imagines that his religious rights could be lost: “One Generation Away.”

Worries about the upcoming Supreme Court decision on same-sex marriage had a conclave of Christian leaders clutching their pearls. One proclaimed,

Once you elevate same-sex marriage to the level of protected status, whether on the federal or the state level, you begin to change and transform the face of society. In my view it will result in the beginning of the end of Western Civilization.

These Christian leaders see themselves as fighting the good fight, but how will this fit with the judgment of history?

Here’s one answer. Jennifer Morse, president and founder of the Ruth Institute (“Helping the Victims of the Sexual Revolution”), was asked if she feared being embarrassed by the seeming inevitability of same-sex marriage. She replied:

I am not the slightest bit worried about the judgment of history on me. This march-of-history argument bothers me a lot.… What they’re really saying is, “Stop thinking, stop using your judgment, just shut up and follow the crowd because the crowd is moving towards Nirvana and you need to just follow along.”

You’ve got to admire that. She’s standing up for what she feels is right, unconcerned about whether it’s popular or how history will judge that position.

But let’s not pretend that the judgment of history is irrelevant. Remember George Wallace’s infamous 1963 declaration, “I say segregation now, segregation tomorrow, segregation forever.” Was Wallace fighting the good fight with his stand for racial segregation? He would’ve said yes. History says no.

Those opposed to freedom for Southern slaves, women’s suffrage, and minorities’ civil rights were all fighting the good fight, like those opposed to same-sex marriage today. Just remember that history wins in the end.

Indeed, Jennifer Morse does think about the evaluation of history, it’s just that she thinks that she’ll be on the right side of it:

And there’s the problem—reading the tea leaves to see where society is moving. There is no reliable route to objective moral truth (I argue that what we imagine as objective moral truth is actually just widely shared or strongly felt moral beliefs). There is no celestial library where the answers to all moral questions are in a big book. The judgment of history is the best we’ve got, and we fool ourselves when we think that moral rightness is determined by anything more lofty.

It might seem shallow to base one’s moral convictions on what society will conclude fifty years in the future rather than on one’s conscience today. But make no mistake: the strength or sincerity of your convictions—about same-sex marriage or any moral issue—are irrelevant. Your stand today will be judged by the conclusions of that future society, and being on the right side of history is all that ultimately matters. Lose that, and you’re just another George Wallace.

Common sense is the most widely shared commodity in the world,
for every man is convinced that he is well supplied with it.
― René Descartes 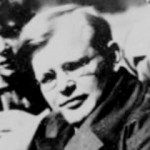 April 1, 2015
Does the Church Face a Dietrich Bonhoeffer Moment? Maybe It’s Just a Case of the Vapours.
Next Post