How Do Science and Religion Overlap? NOMA Imagines Not at All.

How Do Science and Religion Overlap? NOMA Imagines Not at All. April 14, 2015 Bob Seidensticker 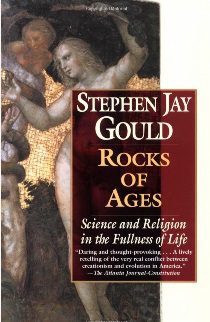 Can science say anything about religious claims? Does religion have anything to say in the domain of science?

Stephen Jay Gould (1941–2002) a paleontologist, biologist, and popularize of science wrote of many things, and one was this clash between religion and science (Rocks of Ages, 1999).

Like Rodney “Can’t we all get along?” King, Gould tried to get everyone to play nice. Science and Religion, he said, are two magesteria—that is, areas of authority—that don’t overlap. He described the different domains of these two Non-Overlapping Magesteria (NOMA) this way:

Science gets the age of rocks, and religion the rock of ages; science studies how the heavens go, and religion how to go to heaven.

No one steps on anyone’s toes, and everyone’s happy.

I heard a variation of this in a lecture by Oxford mathematics professor John Lennox (“John Lennox Responds to Stephen Hawking”). Lennox argues that the two domains overlap but overlap contentedly. For example, Isaac Newton had no problem accepted both gravity and God. Gravity could both be studied scientifically and also be the product of God’s hand.

Yet another reaction is by Richard Dawkins. About Gould’s make-nice accommodation, he says in The God Delusion, “Gould carried the art of bending over backwards to positively supine lengths.” About Gould’s quote above, Dawkins wrote:

This sounds terrific—right up until you give it a moment’s thought. What are these ultimate questions in whose presence religion is an honoured guest and science must respectfully slink away?

Lampooning NOMA further, Dawkins imagines that scientists discover DNA evidence that Jesus really did lack a biological father. Would Christian apologists who favor NOMA say that the magesteria still don’t overlap and that scientific evidence is irrelevant to the study of theology? Would they dismiss the scientists with their useless evidence?

Of course not. Within certain circles of Christianity, this would be the discovery of the century. Given the choice of NOMA or evidence, they’ll take the evidence.

Or take the Templeton prayer study. If it had provided evidence of the effectiveness of prayers, you can bet that Christian apologists would telling everyone who would listen. Faith is nice as far as it goes, but it’s second best when the alternative is hard science that supports the Christian position.

Most Christians have learned from the Galileo fiasco and have no problem with evolution, though Dawkins sides with the other Christians. He agrees that they are rightly concerned that evolution and Christianity are incompatible.

NOMA is a nice idea, but given the continued clash between science and science deniers with a religious agenda, it has had little impact.

The Holy Spirit intended to teach us in the Bible
how to go to heaven, not how the heavens go.
— Galileo